Student services, employees could be affected by proposed $209 million cut to University 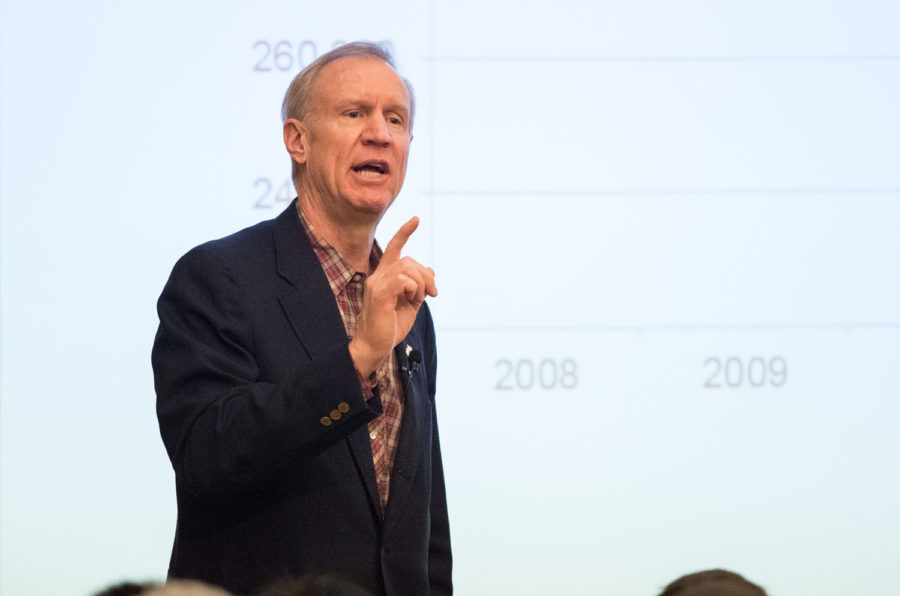 Illinois governor Bruce Rauner speaks at the I-Hotel Ballroom on Thursday, Jan. 29, 2015. Rauner wrote a memo to the Board of Trustees encouraging them to reject a raise for Phyllis Wise.

Hard times may be ahead for the University, which faces $209 million in cuts to state funding in Governor Bruce Rauner’s proposed budget for Fiscal Year 2016, which begins July 1.

“The appropriated dollars are the ones that end up in things that have to do with student services,” said Kent Redfield, professor emeritus at University of Illinois at Springfield. “There’s no question there’s going to be an overall decline in quality in both instruction and research.”

“We’re likely to reduce student employment, cut back on student employees,” Romano said. “And of course that’s not good because students use the money that they earn to help them stay in school, but also many of our student employees are peer educators, so they do a lot of outreach for us.”

Romano also said the HireIllini initiative, a University program that connects employers with students, would have less money to put into advertising and employer outreach and be far less effective.

If the cuts are implemented, Romano said the University faces a budget shortfall this year due to the decision to implement a tuition freeze. However, the University has no plans to roll back the freeze, even in light of a budget deficit.

“The University is really committed to trying to keep the cost of education down,” Romano said. “(The cuts) really put the University in a doubly difficult position.”

There is still time for the Illinois General Assembly to change the governor’s budget before July 1, and Chris Mooney, director of the Institute of Government and Public Affairs, said it is unlikely the final budget will contain all of Rauner’s proposals.

“The budget is sort of a political statement, saying ‘This is what I want as governor, this is what I think the state ought to be doing,’” Mooney said. “He’s not going to get everything he wants … but the broad parameters are probably going to be more like the current one than something else.”

Some of the cuts laid out by Rauner, Mooney said, face more pushback from state legislators than others. He said state appropriations to local governments, which would be halved under Rauner’s budget, and a $1.5 billion cut to Medicaid will be particularly challenging to pass through the General Assembly, he added.

“Some of the cuts have stronger constituencies than others,” Mooney said. “Local government is very influential at the state level. A lot of state lawmakers used to be mayors, or still are mayors, and council people.”

While certain programs and entities may be able to evade Rauner’s cuts in the long run, Redfield is doubtful the University will be so lucky.

“Some of these cuts will be restored, but I would not be optimistic that we’re going to get anywhere close to last year’s budget figure,” Redfield said. “University budgets have been flat or declining in terms of state support for at least 15 years.”

As a result of the cuts, Redfield said the University would have an incentive to attract students to programs with a higher tuition, like engineering and business, as well recruit more out-of-state students who pay a higher rate of tuition.

Maxwell Balkan, vice president of Illini Republicans, is not thrilled about the proposed cuts to the University, but said his opinion of Governor Rauner has not changed.

“It’s unfortunate that we need to have cuts, but the situation is that we’ve been running significant deficits and to continue on the way that we have in the past will lead to even greater deficits,” Balkan said.

However, he does not believe that the cuts will be as drastic as they are at the moment. Like Mooney, Balkan said Rauner’s budget is essentially his starting point for negotiations.

“It’s a step in the right direction,” Balkan said. “A lot of it goes a lot further than he even wants in the sense that he’s trying to negotiate from that position.”

For example, Balkan said, if you wanted to buy a car for $30,000, your first offer to the car dealer would be much higher. If you started with your desired price, he said, you would not be in a good position for further negotiations.

“Almost everything he’s proposed has demonstrated that he’s willing to propose outlandish numbers in hopes that it will move the spectrum of conversation like it’s a business deal, when really it’s not,” Keller said.

Check out the editorial to see our opinion on the proposed cuts.