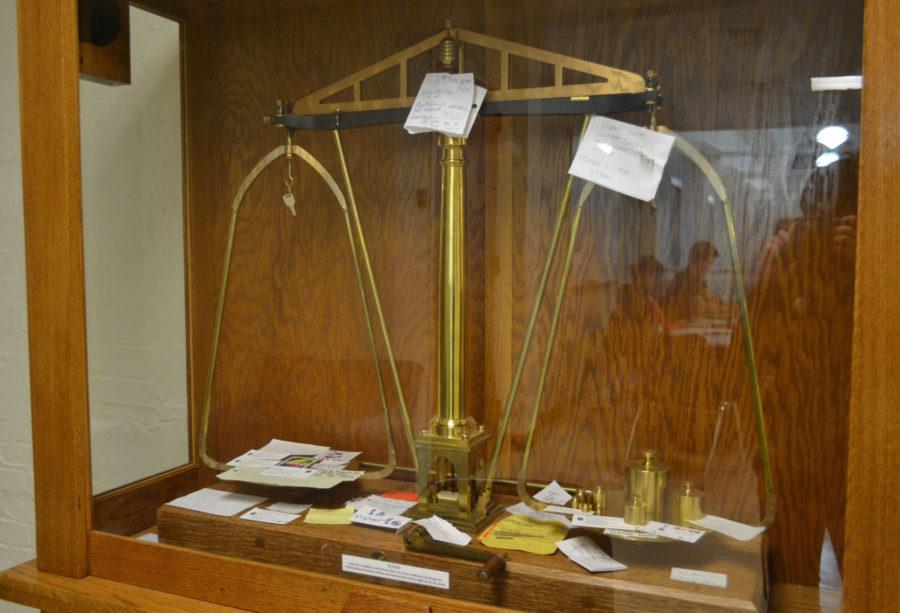 The case that holds a puzzle of the principles of physics on the Mechanical Engineering Lab’s second floor along with the names of those who have successfully completed it.

It started as a late-night campus exploration. Evan Phibbs and Naomi Won had no set destination in mind, but soon enough they found something they never expected: a secret glass puzzle case inside the Mechanical Engineering Laboratory.

“I just walked right past it (at first) because it looked like an average-looking glass case,” said Won, freshman in LAS. “It caught our attention and made us really curious.”

It was camouflaged in plain sight, tucked between a winding set of tiled floors and white halls. It looked like anything but a puzzle.

“I didn’t know about the case before the night we opened it,” said Phibbs, freshman in engineering. “All of us enjoy a challenge, so we decided to attempt to unlock it.”

As they worked together to find a solution, they had no idea they were interacting with one of the most unknown, mysterious parts of campus history.

For nearly 40 years, students have been passing this puzzle case every day, unaware that it’s not just a glass cabinet. It first sat in the halls of Talbot Laboratory. Five years ago, it was moved to its current location in the Mechanical Engineering Lab.

And the mastermind behind it is retired Mechanical Science and Engineering professor, Darrell Socie.

“The best place to hide something is in plain sight, which I did,” Socie said. “One of my hobbies is woodworking, so the cabinet restoration is natural for me. When I got it, the cabinet had padlocks on it. These cabinets sometimes had hidden compartments and locking mechanisms for storing valuables.”

Thus, the puzzle is finding a way to unlock the glass case. According to Socie, there are multiple different combinations and ways students can open the case. And when they do, they find a prized possession inside.

“A 100-year-old piece of research equipment: a bullion scale. It is used to make very accurate weight measurements on heavy objects,” Socie said. “The scale has enough resolution to measure the weight of a fly on the back of an elephant. It has not been used in more than 25 years. After so many years of admiring the scale, I hated to see it discarded. I decided to restore it.”

For those who know about it, it’s become a tradition; a goal to solve it before graduation. It’s been the object of attention for graduates, undergraduates, alumni and campus visitors, even Professor Anthony Jacobi.

“Professor Socie asked me, ‘Can you open this cabinet?’ and I said, ‘I don’t have a key.’ He replied, ‘You don’t need a key. You just have to touch it in the right way. You will never open it,’” Jacobi said. “I took it on as a challenge.”

To Socie’s dismay, he received an email from Jacobi a few days later. He had solved the puzzle.

“I got an email from him with a picture of an open cabinet,” Socie said.

As Socie approached retirement, he decided to reward Jacobi’s ingenuity. He proclaimed Jacobi as “the keeper of the cabinet,” the one who would watch over the case for years to come. To Jacobi, however, it’s much more than that.

“I’m the admirer of the cabinet. I’m just a person who appreciates clever design and careful workmanship,” Jacobi said. “I try to watch over it, take care of it and communicate to him about it from time to time.”

Now, Jacobi leaves a business card and a set of secret instructions inside for future puzzle-solvers to follow after they open the case.

Today, around 30 people have solved the case, two being Evan Phibbs and Naomi Won.

“We tried to open it the way most do — playing with the wooden slabs, the drawer and cabinet. It was figuring out how those different components connected together on the inside that was the key,” Phibbs said. “What a creative idea to just put a puzzle out there for students to solve. Each one of us was integral in solving a different step of the puzzle. I felt that we were all important.”

Not many campuses have puzzle cases quite like this. Jacobi said having secret puzzles scattered and hidden throughout campus furthers education beyond the classroom walls.

“I think students who tinker with the puzzle out of curiosity are taught that curiosity is fun and solving the puzzle is fun. It teaches something about design,” Jacobi said. “The puzzle has a legacy, and they’re interested in maintaining that. It’s a very clever design.”

To Socie, the puzzle was just another game to play.

“Why do it? It’s a challenge, initially for me, and now for everyone else. It is becoming a tradition to solve the puzzle before graduation,” Socie said. “Someday, I expect to find the solution posted on the Internet.”

When that day comes, Socie is prepared.

“I plan to begin restoring another cabinet this summer. I already have a design for a new locking mechanism,” Socie said, “One that I don’t think anyone will solve.”