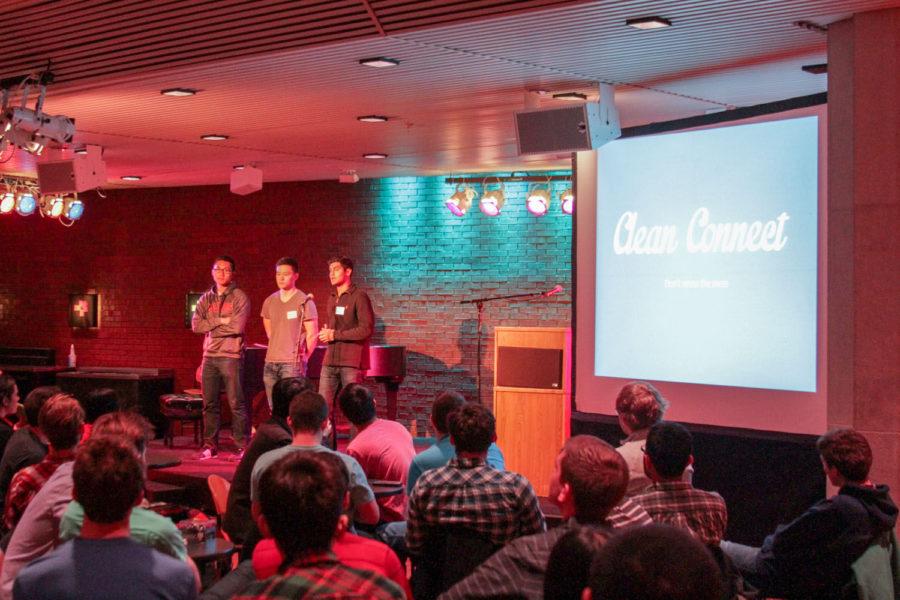 Amrit Singh, sophomore in Engineering, presents Clean Connect, an app to connect cleaners and apartment residents, at one of the recurring SocialFuse events.

At a top-rated campus of more than 40,000 students, potential partnerships between those with ideas and those with skills can be difficult to create. But this challenge spurred the idea for SocialFuse.

The event takes place two to three times per semester where student teams can pitch ideas and network with community members, faculty and students of all backgrounds. The next event is Wednesday at 6 p.m. at the Ikenberry Commons.

“It’s for people who are entrepreneurially-minded,” said Stephanie Larson, assistant director of Student Programs and Marketing at the Technology Entrepreneur Center.

“I would try to connect them over email,” Larson said. “It would happen pretty regularly throughout the semester, so we thought, ‘Why don’t we start an event where we can bring these two types of students together?’”

The first hour of the event consists of teams getting on stage and pitching their ideas, while the following hour is networking one-on-one. After audience members have been introduced to 20 different ideas, they scout out the speakers and discuss how to join their team.

“It’s different for each (team), but usually they have a conversation there, and then they exchange contact information if they’re interested and then they would meet again usually and either interview or ask more questions,” Larson said.

Supriya Hobbs, 2014 University alumna, pitched her idea in 2013. She is the CEO and co-founder of Miss Possible, a start-up toy company that creates dolls modeled after inspirational women throughout history, such as Marie Curie. There is also a digital component where an animated Curie guides children through chemistry and physics activities they can do with household materials.

Hobbs and co-founder Janna Eaves, senior in Engineering, were annoyed that there were less women than men in their engineering classes. After doing some research, they discovered that early exposure and relatable role models are critical to girls’ future career choices.

Combining those two elements and bringing the idea to SocialFuse was the next step.

“I went to a number of different SocialFuse events,” Hobbs said. “The whole idea is to help people from different parts of campus get connected, especially get connected around ideas that they’re passionate about.”

Miss Possible gained a lot of interest at the event, she said. Many attendees approached her just to say they liked the idea while others wanted to join the team. Hobbs credits SocialFuse as the primary way she was able to find people to work with.

“We met somebody at SocialFuse and he introduced us to a friend of his who is now our lead designer,” she said.

Through an Indiegogo campaign, Miss Possible has raised more than $85,000 in the last year. Hobbs said she hopes to see her dolls sold in stores next to Barbies and Bratz dolls someday.

“It’d be great for these women to get the exposure and respect they deserve from a variety of people, including little kids,” she said.

SocialFuse has grown quickly since its start in the fall of 2012 when only 60 students participated. The 10th event was recently held on Jan. 28 at the Krannert Center for the Performing Arts where 205 students attended. More than 200 teams have pitched ideas in front of more than 1,200 attendees.

The location changes each time in order to attract students of all backgrounds, Larson said. SocialFuse has been brought to the Thomas M. Siebel Center for Computer Science, Business Instructional Facility, Illini Union, Loomis Laboratory and the Micro and Nanotechnology Laboratory.

“We thought we would just hold it once a year, maybe once a semester, and then now that we’re up to two to three times a semester, we’re still getting 200 people like last month,” Larson said. “I love it when I hear a student say that they met somebody that they were able to connect with at the event and they joined their team.”

Richard Kim, graduate student in LAS, discovered SocialFuse through the Cozad New Venture Competition and attended to scope out the competition. He said his team was not yet confident enough to present its own product or sure it was legally allowed to as it awaited patent processing.

“I didn’t really understand the point of the event,” Kim said. “When I went there, I didn’t even have time to eat. We were just shaking hands, trading ideas, talking to people and it was a lot of fun.”

Kim and his team developed headphones that never tangle by putting them in a casing made of a different type of plastic. After networking with people at SocialFuse, their product transformed from headphone casings to an entirely new prototype in two months.

But a lawyer advised them against presenting their idea before the patent was ready in case someone tried to steal it. At the same time, Kim had been developing dental equipment with a friend that was ready to be pitched.

“It was nerve-wracking. I thought I was ready but I really wasn’t,” he said “When you get up on stage with people watching you and cameras, it’s just a different experience, but I was really happy I did it. It was invaluable.”

Kim said it was good practice for the presentation he gave to investors a few weeks later. They decided to invest $70,000 in the dental equipment, disqualifying Kim from SocialFuse as the rules state receiving $50,000 and above of equity financing disqualifies teams. He also talked to lawyers, professors and students, one of which had manufacturing connections in China with his family.

“You read things about kids starting things in college and you go to an event like this and you realize that it’s totally doable, and you can really chase your dream and start your own company and build your own product and stuff that I never would have imagined last year that’s happening now.”