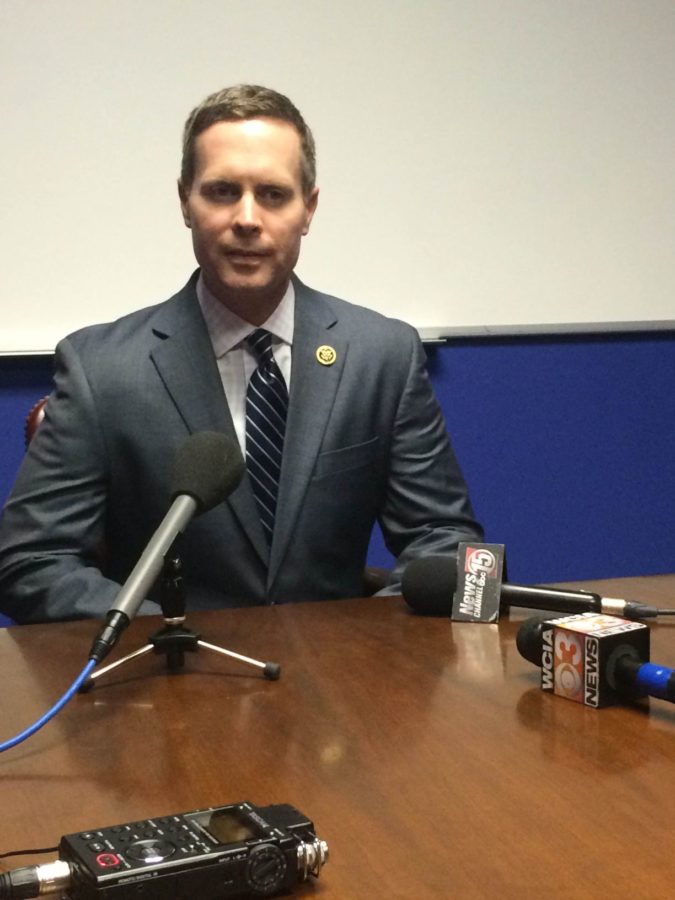 Representative Rodney Davis (R-13) speaks to reporters in Champaign on Wednesday about the EPA's decision to designate the Mahomet Aquifer as a Sole Source Aquifer.

State, local and federal representatives praised the U.S. Environmental Protection Agency’s decision to designate a segment of the Mahomet Aquifer as a sole source aquifer, SSA, fulfilling a long-time goal of Illinois lawmakers.

“This designation makes clear the importance of the Mahomet Aquifer and will hopefully help further the bipartisan efforts of state and local officials to protect the main source of drinking water for more than 700,000 residents throughout Central Illinois,” said Rep. Rodney Davis, R-IL 13.

The aquifer’s status as an SSA has been the subject of much discussion, due to Area Disposal Company’s permit request to dump toxic Polychlorinated Biphenyls, or PCBs, in the Clinton Landfill, which sits just above the aquifer.

The EPA’s definition of sole source designation means the agency recognizes the aquifer as supplying “at least 50 percent of the drinking water consumed in the area overlying the aquifer,” and that there are no alternative water sources “that could physically, legally and economically supply all those who depend on the aquifer for drinking water.”

Mahomet Aquifer’s new status as an sole source aquifer requires the EPA to review all projects within the designated area that receive federal funds to assess the likelihood of a potential contamination to ensure the aquifer remains unpolluted.

“Sole Source designation will protect our Aquifer now and for generations to come,” said State Rep. Carol Ammons, D-103, in a statement. “This designation for the Mahomet Aquifer by the U.S. EPA recognizes its vital importance as the sole source of drinking water for hundreds of thousands of residents of Central Illinois.”

The Mahomet Aquifer is an underground layer of water-bearing gravel and sand that stretches across 14 Illinois counties. According to the EPA, the aquifer supplies roughly 58 million gallons of drinking water to 120 public water systems, thousands of rural wells and 500,000 people daily. More than half of East Central Illinois’ population relies on the aquifer for all of their drinking water.

“As one of the individuals who testified at the regional hearing in favor of this designation, I’m glad to see the U.S. EPA recognize this wonderful resource for what it is,” said State Sen. Chapin Rose, R-51, in a statement.