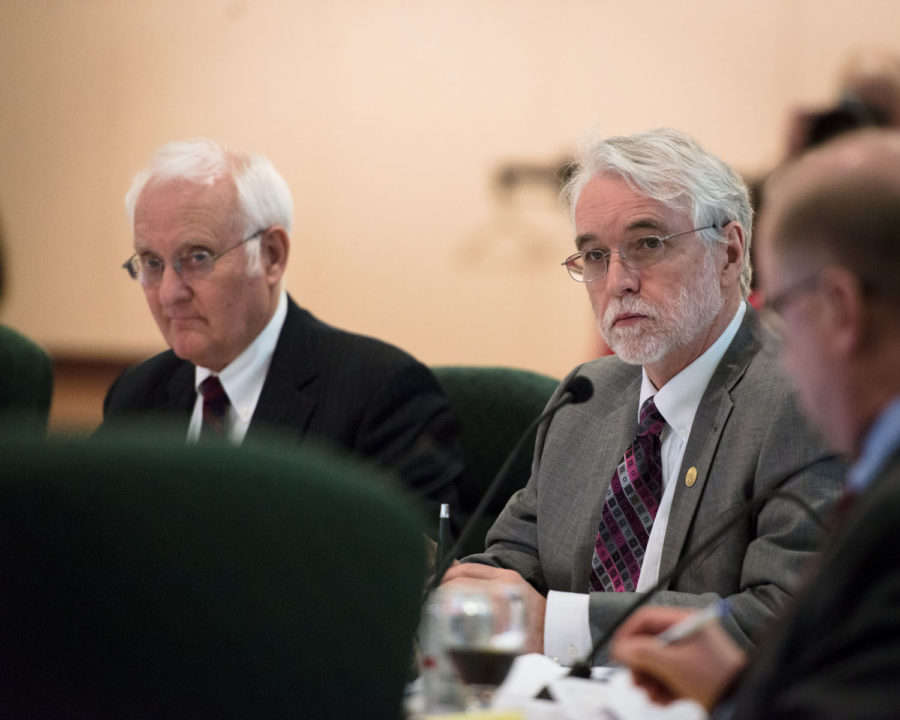 President-elect Timothy L. Killeen listens intently during the board of trustees meeting at the Illini Union on Thursday.

From exploring tattoos that could block epileptic seizures to biobots for your bloodstream, University members are excited to see what new discoveries the College of Medicine will bring to campus.

On Thursday, University Board of Trustees unanimously approved a proposal to create a bio-engineering focused College of Medicine in Urbana ­— the first college the University has created in 60 years.

“Illinois does big things, and we should be doing this,” Provost Ilesanmi Adesida said at a Senate Executive Committee meeting in January, during preliminary discussions.

The University launched a website for the college displaying the college’s slogan: New College. New Medicine.

“A revolutionary shift in medical education and research is happening now. The Carle-Illinois College of Medicine will be the nation’s first engineering-based medical college,” the site states. “Our graduates will be uniquely equipped to transform health care.”

Marty Burke, professor of chemistry, believes the college will be transformative for the health care industry.

“Unleashing the tremendous power that lies at the intersection of basic science, engineering and medicine stands to have a transformative impact on society.”

Carle Foundation has promised $100 million over ten years to help fund the college, and the University will enter a binding contract with Carle. Additionally, Chancellor Phyllis Wise said the financial plan includes allocating at least $135 million in donations within the next ten years; if the University is not on track to meet the goal, the college will not receive accreditation. Wise added that an unnamed donor has promised $10 million.

“After a while, words don’t do anything as much as actions,” Wise said.

In the meantime, he said University officials will begin “scoping people out” to serve as a dean for the college, who will be responsible for hiring other administrators and faculty.

Adesida said the University anticipates to yield a strong list of national and potentially international candidates for dean. The University expects the founding dean to be “a dynamic individual with the skills and drive to lead the development,” Adesida said in an email.

Adesida said there is flexibility in the timeline, but the University hopes to enroll the first class of 25 students by 2017.

Easter told trustees Wednesday that he grappled with the proposal for a long time and ultimately decided on three criteria the college needed to meet: advancement of the land grant mission, advancement of research and educational missions and economic feasibility.

“I was as skeptical as any,” Easter said.

After consulting with financial experts and hearing support from the Academic Senate and Senates Conference, Easter said he was sold.

Easter said it is extremely important the proposed college not diminish the existing College of Medicine at the University’s Chicago campus; rather, Easter anticipates the two will collaborate.

Officials aren’t the only ones excited about the new college.

Danielle Leibowitz, Chicago student trustee, said she is feeling “increasingly enthusiastic” about the new college. Leibowitz said she talked to many students and faculty members about the college who are confident in its potential.