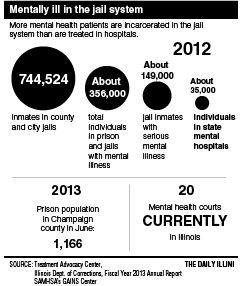 Illinois’ prisons are overflowing – according to the Bureau of Justice Statistics, they have been operating at 150 percent of their intended capacity, costing the state millions.

In an effort to tackle overcrowding, Gov. Bruce Rauner signed an executive order establishing the Illinois State Commission on Criminal Justice and Sentencing Reform. The commission will review the state’s criminal justice policies, draft a final report on their findings by the end of the year and provide potential solutions to reduce the number of prisoners in Illinois.

“The current prison system is costly, overcrowded and ineffective,” Rauner said in a statement. “We need to reform the system to stop the costly and vicious cycle of recidivism and help those who’ve left prison get the help they need to become productive members of society.”

The primary goal of the commission is to reduce the number of the state’s prisoners by 25 percent over the next 10 years while maintaining public safety. However, the Illinois Sentencing Policy Advisory Council and Illinois Criminal Justice Information Authority both found that over the last 40 years, violent crime has fallen 20 percent while the prison population has increased 700 percent.

According to the Illinois Department of Corrections, the number of inmates rose from 44,669 to 48,877 between 2005 and 2014 alone, an increase of nearly 10 percent. In his executive order, Rauner also said that 48 percent of Illinois inmates are back in prison within 3 years of their release.

The commission is comprised of experts in criminal justice from various fields, including law enforcement, state government and academia. Public Safety Director and Homeland Security Advisor to the governor, Rodger Heaton, was appointed as commission chairman.

University law professor Andrew Leipold was also named to the commission, bringing more than 20 years of criminal law experience to the table with him.

“It was very flattering,” Leipold said on his appointment. “It’s an important topic, and the governor seems serious about doing something serious.”

Leipold said his career as an academic gives him a unique set of perspectives on criminal law, which he believes could prove to be very useful in identifying strategies to shrink the state’s prison population.

“Since I don’t have the pressures of representing clients day-to-day, it’s easier for me to step back, look at the research, do research and think about some of these issues,” Leipold said.

The commission is operating on two major deadlines. It is expected to submit an initial report of its findings and policy recommendations for the criminal justice system by July 1, and a final report by December 30.

While they have not yet had a chance to meet yet, Leipold said the toughest task facing the commission will be trying to find a balance between punishing criminals and reintegrating them back into society once they are released.

“That’s the challenge – trying to find out exactly where the balance lies between these, at times, competing interests,” Leipold said. “That’s going to have to be a lot of what the commission has to think about.”