Proposed amendment would defund the University 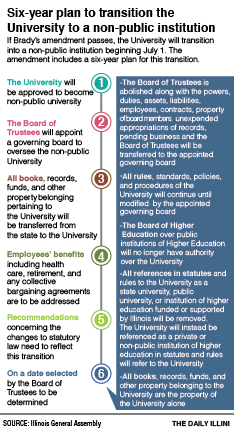 No state has ever defunded its public universities. However, this could change for Illinois with Sen. William E. Brady’s proposed bill. Currently the amendment to make the University a non-public institution is on pause as Brady edits his amendment and other representatives draft their own proposals and the government is in recess.

“The state of Illinois, like all states, has a responsibility to educate its citizens,” said Joyce Tolliver, University Senates Conference representative. “This bill, if it were passed, would give us the dubious honor of being the first state in the nation to completely abandon that responsibility.”

The amendment, proposed by Sen. Brady, R-44, would defund all public Illinois universities. It includes provisions for a six-year transition plan, which would begin this July if passed, but the amendment is still in its preliminary stages.

“A wholesale withdrawal of state support to the university would be very difficult to manage, even if it were phased out over several years,” said Nicholas Burbules, professor in Education. The bill still lacked key details at this stage, Burbules said, so it was difficult to know what to make of it.

“I don’t think it’s going to go anywhere, to tell you the truth,” Tolliver said. “The bill in its present form would really not be considered seriously even by the legislature.”

If the amendment were to pass, the University would be left with funding from tuition, donations and federal and private grants. With tuition already at the top end of the Big Ten, Tolliver said it is important to keep costs down as much as possible. Grants and donations must be appropriated to the specific interests of the donor.

“We cannot depend 100 percent of our budget on what people decide to donate to us,” Tolliver said.

Tolliver said her concern with the amendment is the message it sends to the people of Illinois. Although it is too early to oppose or support the amendment, she said as a matter of principle she could not support any amendment that would entirely defund an institution set up as a federal land grant.

“The state is responsible for the education of its students,” Tolliver said. “I don’t know how you defund an institution set up as a land grant institution, which is ultimately a federal mandate.”

However, Tolliver said, the Brady Amendment is important because it sheds light on deregulation. Regulatory control affects the rate at which University members can conduct research and access resources. She said decreased regulation could be one “plus side” of the bill.

“I think it would be a good thing if there were fewer regulatory burdens on the University,” Burbules said. “I don’t know if this is the way to do that.”

Tom Hardy, University spokesman, said the University is in the process of reviewing this new piece of legislation but said Brady would like to open up a dialogue with the University about the Amendment.

“Certainly if he is going to do that, we are ready willing and able to participate in that conversation,” Hardy said.