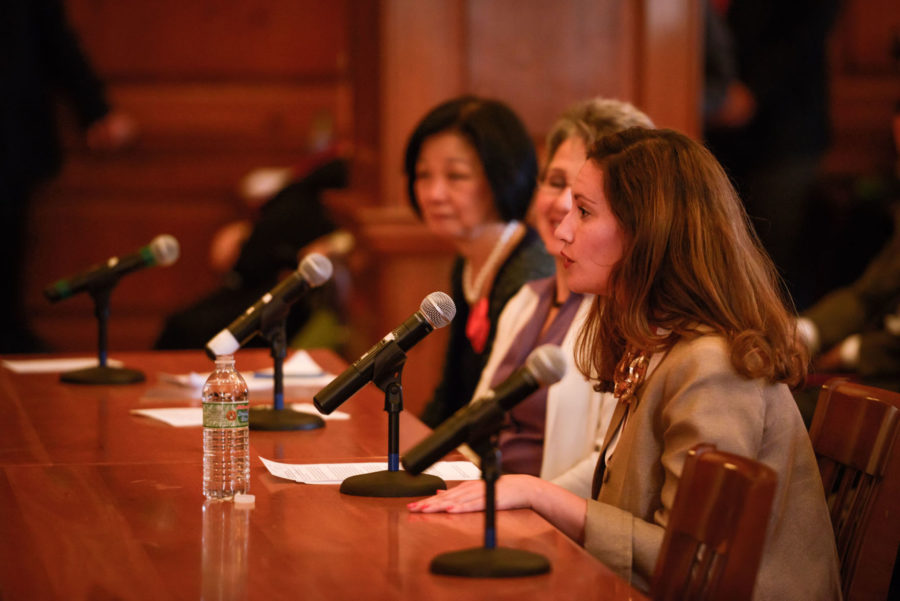 University administrators left Monday’s forum on Gov. Bruce Rauner’s proposed state budget cuts with the reminder that the budget has not been finalized.

State Sen. Dan Kotowski, R-28, said it is typical for the governor to introduce a budget to be discussed and adjusted before it is finalized.

“As we always do, we’re working as hard as we possibly can to get the job done,” said Kotowski, who serves as the chair of Rauner’s appropriations committee.

Wise informed state officials of the University’s strengths, which she said will suffer if the “draconian” budget cuts are made in fiscal year 2016, which begins July 1.

“Every dollar of salary paid to UI employees generates 90 cents to the state,” she said. “Every dollar spent at UI generates another 84 cents for Illinois.”

Wise said a decrease in faculty members will be detrimental to research funding, recruiting and students.

“Faculty flight becomes a huge risk,” she said. “Faculty are the essence of our community. If we start losing faculty, we will not be able to continue our mission.”

Cutting funding in other areas, such as administration, would not ease the impact of the reductions, as it would likely increase the cost of attendance, Wise said.

“More out of state and our best in-state students will choose to attend other universities,” Wise said.

As a result, Wise said, the surrounding community would suffer along with the University because it is one of the largest employers in the Champaign-Urbana area.

“It’s taken about 150 years of sweat, labor and tears to build this University,” Wise said. “Please let’s not tear it apart.”

Romano and Frerichs echoed Wise, explaining how student services and the University’s ability to aid entrepreneurship would suffer.

Frerichs said the Research Park provides a critical workforce to fuel new technical ventures; it also trains new entrepreneurs and aids startup companies. The University’s start-up incubator has fostered over 160 successful start-up companies since its conception. She also cited companies such as PayPal and Yelp.

Following the University’s testimonies, the panel asked a series of questions about University funding and the programs Wise, Romano and Frerichs discussed.

Kitowski asked Wise if she had expressed her concerns to Rauner. Wise stated she has not had an opportunity to talk to the governor directly but would be eager to do so.

State Sen. Heather Steans, D-7, voiced concern about how the budget cuts would directly impact University programs, such as the incubator.

Essentially, Wise said, the University would no longer be able to pay the necessary staff to keep the programs running as they currently do.

State Rep. Chapin Rose, R-51, said the University and state need to take the proposed cuts as an opportunity to reform the state. He said there are other alternatives to the 31.5 cut in state appropriations; however, if some action isn’t taken ,the 31.5 percent reductions could become a reality.

After the discussion with University officials, Mayors Don Gerard of Champaign, Prussing of Urbana, Scott Eisenhauer of Danville and Charles Smith of Rantoul spoke on behalf of their respective cities.

Gerard said businesses are coming to Champaign, not leaving, and the city should be rewarded for that. He added that Champaign has lowered its unemployment rate to five percent and said he believes state investment should reflect the city’s success.

“If we are to compete with other states, we need to invest as the city of Champaign invested during the recession,” Gerard said. “The state may balance its budget and it may look good, but the burden will be on local governments.”

Gerard said if the state of Illinois makes the proposed cuts to Champaign’s budget, it would be like sending someone to play baseball without a bat or a glove.

“If you take away the tools, we cannot compete with Indiana or Wisconsin or any other states,” he said. “Cuts need to be made and pain will be felt, but right now the city of Champaign is driving Illinois’ economy.”

Abigale Svoboda contributed to this report.