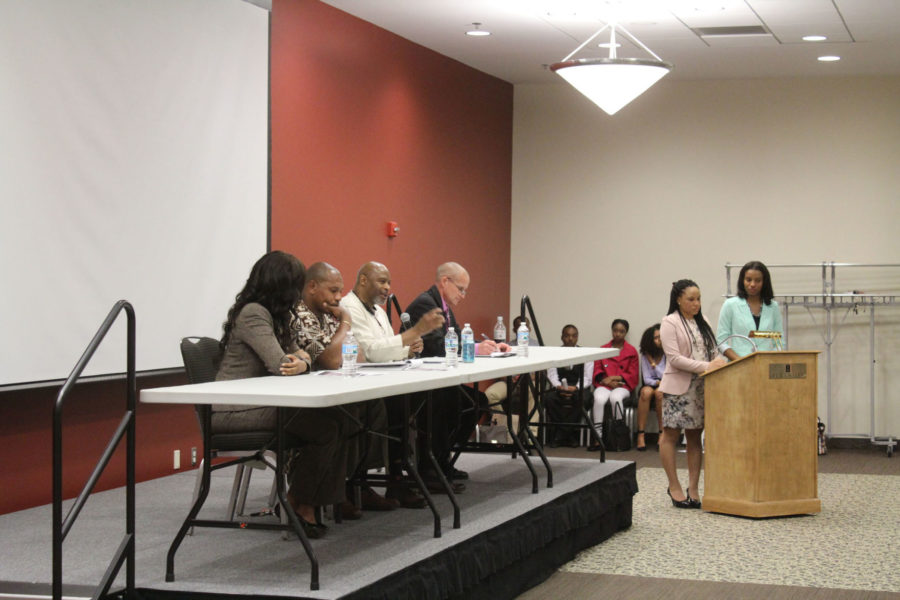 In March, Tony Robinson, an unarmed 19-year-old male, was shot and killed in Madison, Wisconsin. The deaths of Eric Garner and Michael Brown were the results of similar situations.

“Police brutality incidents have been occurring rapidly over America. It has become something of a cycle” said Joseph Davis, editor of the National Association of Black Journalists Illinois Chapter.

To combat the cycle, the Champaign chapter of the National Association of Black Journalists, hosted an event, “Breaking Brutality,” on Tuesday.

The event was hosted as a question and answer forum in which facilitators Teryn Payne and Ariana Conner, from the association’s University chapter and former Illini Media Company employees, posed questions to four panelists.

“We realize this event will not break the cycle,” Davis said, “but we would like to take steps toward doing so today.”

Questions posed included what role the media plays in police brutality coverage, what the public should take away from incidents of police brutality, proper police training and the need for citizens to know their rights.

“This is brutality imposed by some officers. It’s not the police as a whole,” Ammons said. “There are particular officers in these situations, and it’s no coincidence that black men are being gunned down all across the country.”

Ammons went on to stress there is a culture that exists in the police scene, which he said prevents police officers from receiving repercussions for misconduct.

“We should understand the laws that govern the police, as it helps you understand why police officers get the treatment that they get,” Ammons said.

Schlosser, a 20-year police veteran, said he teamed up with Cha-Jua to create a new system of training police academy students, which focuses on de-escalation techniques.

“We’ve started working on a curriculum that we hope will make a difference,” Schlosser said. “Awareness is important, and knowledge is important.”

Schlosser said hours of training and work went into developing the new system. He said he and Cha-Jua are working to train new officers in ways many other training academies are not.

“It’s how you talk to people,” Schlosser said. “It’s as simple as asking people things instead of telling them and taking the time to explain things. We want to give them options.”

Cha-Jua said while working with Schlosser is an important first step in revamping how police are trained, he believes the whole system needs to change.

“One of the few groups we give weapons to and the power to take a life away only requires a high school education,” Cha-Jua said. “Maybe they should require a college degree with at least a minor in African American or Latino studies before we let them on the streets with people.”

Cha-Jua said he doesn’t believe the penalties for police misconduct are harsh enough, and believes that contributes to police brutality.

“We have to have civilian review boards, and we have to have intense penalties for police misconduct,” Cha-Jua said. “We need harsh penalties to bring police in line and make them more human.”

The panel also stressed the importance of citizens knowing their rights, especially in cases of arrest or when facing potential police misconduct.

“We have to take that responsibility on our own to know our rights,” Burns said. “Google is your friend — Google what your rights are. Ask an attorney to come to your community to educate yourself.”

Burns said it is important to know the fourth amendment, which protects citizens from unreasonable searches and seizures without probable cause.

The panel also addressed the role of the media and private citizens in police brutality.

“The media’s role is the same as the police: telling the truth,” Schlosser said. “When I see police officers lying or covering things up, that embarrasses and angers me.”

Cha-Jua said police reports should not be taken at face value, and it is important for citizens to support alternative media.

“We know police lie, we can’t have media that simply reiterate the police story,” Cha-Jua said. “We can’t print an arrest record unless we also print complaints on the police officer.