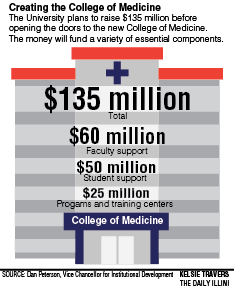 Creating the College of Medicine will cost $235 million, a task university administrators are trying to complete through fundraising and private donations.

Of the $135 million left to raise, most of the funding will go toward hiring faculty, said Dan Peterson, vice chancellor for Institutional Advancement.

The college will not require its own building, Peterson said, allowing $60 million of $135 million to go toward faculty members.

In March, the Board of Trustees approved the Urbana-Champaign campus’ first new college in 60 years, with a $100 million commitment from Carle Foundation Hospital over the next 10 years.

Before becoming an accredited college from the Liaison Committee for Medical Education, the college must raise the remaining funds needed.

“Showing the financial viability of a new college is probably the most important factor in gaining preliminary accreditation, which allows you to admit your first class of students,” said Normand Paquin, associate director for research in Coordinated Science Library. “The (committee’s) is very sensitive to the notion that if you’re admitting students, the college must be viable.”

Paquin called the college’s timeline “aggressive,” as it hopes to open its doors in the fall of 2017. This means accreditation would have to be in place by early 2016 in order to start recruiting students later in the year, Paquin said.

“It’s safe to say that we would need to have within say, two years, a significant commitment of the $135 million,” Peterson said. “We may need $50 million, $75 million or maybe even $100 million committed within the next two years.”

So far, the majority of the contributions to the college came from near or within Champaign-Urbana, Peterson said.

“We hope to secure a good portion of support from here in the local community, but it really is going to be national and international venture,” Peterson said. “We have the Carle piece, and the chancellor announced we had a $10 million commitment from a regional donor, so we’re in the process of finalizing that.”

“The (committee) likes to see funding for a new college of medicine come from a variety of resources,” Paquin said. “It is looking to see that the entire burden of the college is not on the students themselves.”

Paquin said the college will be funded in part through tuition, but also with private investments, philanthropy and external research grants.

“I think it’s very possible that some colleges on the campus have the significant portion of their revenue coming from tuition,” Paquin said. “For a college of medicine, you’re supposed to eliminate that number.”

Peterson said right now, the focus is assembling a list of prospective donors, particularly those whose interests align with the engineering focus of the College of Medicine.

While the original plan for the College of Medicine called for building a new medical enterprise center, the business plan does not budget for it, Paquin said.

“We will refurbish what is already good space to house the College of Medicine until we have the necessary funds,” Paquin said. “The current business plan does not assume we will build a new building.”

Peterson said the hiring process will begin with hiring the founding dean of the college. This dean will have the responsibility of helping drive the committee’s accreditation, becoming a partner in the fundraising process and ultimately driving the recruitment of the faculty.

“My understanding is there’s a group that’s putting together a job description for it and thinking about a recruitment process,” Peterson said.

He said the hiring process for the dean would likely begin after the academic year ends, sometime in the summer of 2015.

Peterson said there seemed to be a lot of interest and excitement in the University community about the college, and he is excited for its future.

“I’m optimistic we’ll reach and exceed our goals,” Peterson said. “We’re going to deliver for the campus, community and the world as the very first engineering based College of Medicine.”