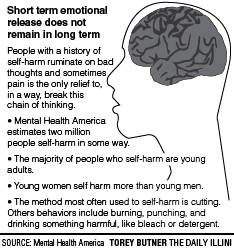 To help prevent self-harm in the future, a psychology study is being conducted on University students who have a history of depression and a tendency to induce non-suicidal self-injury.

“For example, in non-suicidal self injury, people report that they hurt themselves as a way to stop bad feelings or to forget bad memories so maybe in the short term it has some benefit, but in the long run it is related to suicide attempts, guilt and shame of engaging in it (and) it can cause problems with family members, emergency room visits, etc.,” Bresin said.

Non-suicidal self-harm can include substance abuse, self-injury and impulsive aggression, such as punching a wall or ruining property, said Allison Daurio, one of Bresin’s research assistants and senior in LAS.

According to Bresin, the research predicts that those who use pain to reduce their negative emotions and tend to think repetitively about negative thoughts have a tendency to remember negative words and ultimately, negative events or aspects in their own lives.

He said identifying how the studied behaviors isolate a person from society and personal relationships could provide strategies to help counter the thoughts and behaviors before they have a destructive effect on the individual.

“There are people that need help just adjusting to normal life. If you have individuals that are showing these negative effects to other people, they are not going to be able to … strengthen themselves,” Daurio said.

Alex Rabadan, one of Bresin’s research assistants and sophomore in LAS, said she thinks studying University students prone to depression and self-harm is important because the 18- to 24-year-old age group represents the emerging leaders of the next generation.

Rabadan said the effect of competition and high expectations from college students can foster negative thoughts and behaviors when those expectations are not met.

By studying those with a history of depression or self-harm Bresin said the long term goal “is to understand the processes that allow for the short term benefits in order to start thinking about what skills can we give (them) that will help them have other ways to deal with the emotion, or maybe even preventing people from ever doing it.”