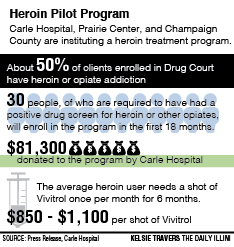 In Illinois, heroin was the second most common drug and the most common illegal substance that individuals sought out treatment for in 2008 and 2009, according to the Illinois Consortium on Drug Policy.

But while the use of heroin has expanded to Central Illinois, organizations in Champaign County are working toward assisting heroin users with a new treatment program.

The Champaign County Drug Court, a specialty court that deals with drug abuse cases, is partnering with Carle Foundation Hospital, the Prairie Center and a number of other entities to combat heroin abuse with a new heroin pilot program that will launch in April, said Jeffrey Ford, Champaign County Judge.

The program will last 16 to 18 months and allow people who are currently addicted to heroin and have committed a felony to forgo prison and instead fight the addiction with the new treatment plan.

Substance abuse centers in Illinois saw heroin as the largest drug admission in 2010, which reported more than 10,000 treatment episodes, according to the White House’s Illinois Drug Control Update.

According to a letter on the Prairie Center’s website from Del Ryan, Drug Court Coordinator of Champaign County, the yearly average cost to house a prisoner in the Illinois Department of Corrections is $24,500, while the cost for a drug participant in the drug program is $4,000 per person.

According to a press release from Carle, the program is using the drug Vivitrol, which is produced by Alkermes, a global biopharmaceutical company, because the drug reduces cravings. The drug is administered through one monthly shot, compared to the usual daily pill, according to the press release.

The heroin program is being funded in part by Alkermes, which is providing the first shot free for each person and offering a rebate that will cover half the cost of any following shots to those in the program, Ford said. The average cost of the shot varies, but prices usually range from $850 to $1,100, according to the American Association for the Treatment of Opioid Dependence. The shots will be administered to users at either a prison facility or the Prairie Center.

The average participant will average about six months on the shot. Carle will contribute $81,300 for laboratory testing and naltrexone medication therapy, according to the press release.

Suardini said Carle will also be involved in testing patients for pregnancy and liver strength in addition to continuing drug tests.

Rick Boerema, Director of Medical Specialties at Carle, said the hospital will test for pregnancy and liver problems because Vivitrol can negatively affect a fetus and the liver. Only those with healthy livers are allowed to participate in the program, Boerema said.

Suardini said counseling is necessary in the program because Vivitrol is seen as less effective without it. “We offer the counseling services and monitor the clients,” Suardini said.