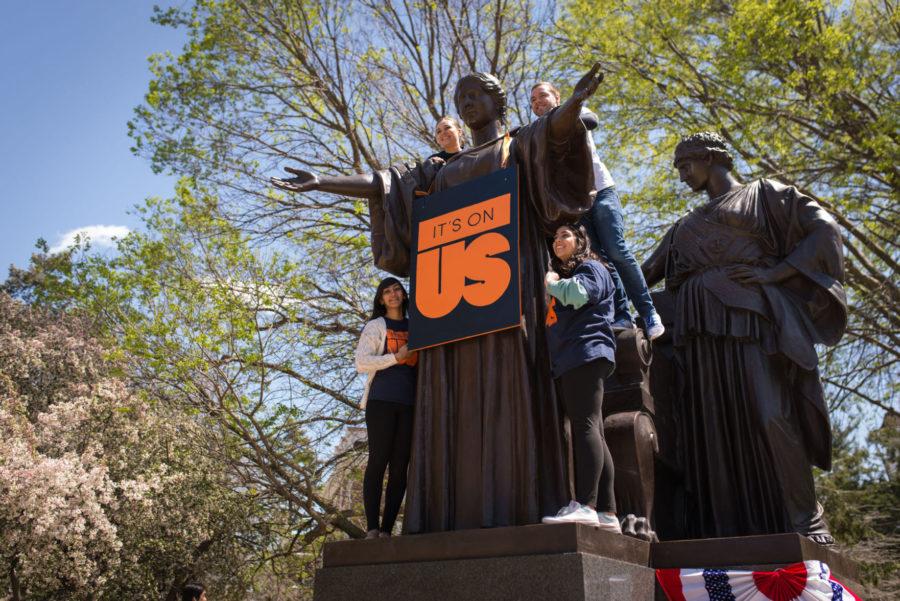 Annalisa Roncone (top left), freshman in LAS, Mitch Dickey (top right), junior in LAS, Farah Chalisa (bottom left), junior in LAS, Samantha Awad (bottom right), sophomore in LAS, pose on the Alma Mater after decorating it for the It's On Us campaign.

UPDATE: Rep. Rodney Davis will accompany Vice President Joe Biden on his visit to campus Thursday. Rep. Davis was invited by Vice President Biden to speak about the It’s On Us campaign.

Ashley Phelps, Davis’ communications director, confirmed that he will be speaking and said that the cause “really hits home” for Davis because his own daughter will be starting college this upcoming fall.

Across campus, members are moving quickly to prepare for a campus visitor beyond the typical norm: the Vice President of the United States, Joe Biden.

Biden will deliver remarks on the “It’s On Us” campaign at Campus Recreation Center East on Thursday. The event will begin at 1 p.m. and is open to the public.

The Illinois Student Senate has been one of the top participants in the “It’s On Us” campaign, which was launched by the White House in 2014.

The campaign aims to empower students by promoting them to not serve as bystanders to sexual assault.

Matt Hill, Illinois Student Senate vice president, said the student senate’s main focus is to make the student body excited about the event and guarantee the “It’s On Us” campaign earns the necessary attention.

Additionally, Hill said, students were able to register on the Quad Monday and others decorated the Alma Mater in “It’s On Us” apparel Tuesday to promote the event.

According to the event’s Facebook pages, tickets are already all distributed, but students can register on a waitlist.

Hill said the Illinois Student Senate is hoping for as many students across campus to be able to attend and are trying to determine if there are any accommodations for an overflow area.

A physical ticket is required for attendance and will detail security information. Students who registered online are not guaranteed a ticket.

Patrick Wade, University of Illinois Police Department spokesman, said the details of the security measures cannot be released, but the department will be working with the Secret Service to make sure “everyone is very comfortable” with such a high-profile guest on campus.

Gregory Drive between Goodwin Avenue and Dorner Drive will be closed Thursday from approximately 12:00 pm to 3:00 pm to accommodate the vice president’s motorcade.

“Obviously we can’t say anything very specific about what we are doing, but people should expect to see a couple more police officers and just some different security measures in place,” Wade said.

The location will be closed on Thursday for any regular users. The gym, upper level and Racquetball Court 1 and 2 at Campus Recreation Center East will be closed Wednesday and Thursday in preparation for the event. Hill said security measures similar to an airport will be in place Thursday. Students should bring few personal items and not bring large bags, backpacks, sharp objects, liquids or signs into CRCE.

Willard Airport manager Steve Wanzek said security measures will be enhanced for the vice president, who will be flying in with Air Force Two to Willard Airport in Champaign on Thursday.

“A lot of things happen when the President or Vice President visits, all are security related,” Wanzek said.

He said the motorcade will start at the airport and close off intersections for a short length of time as it comes to campus.