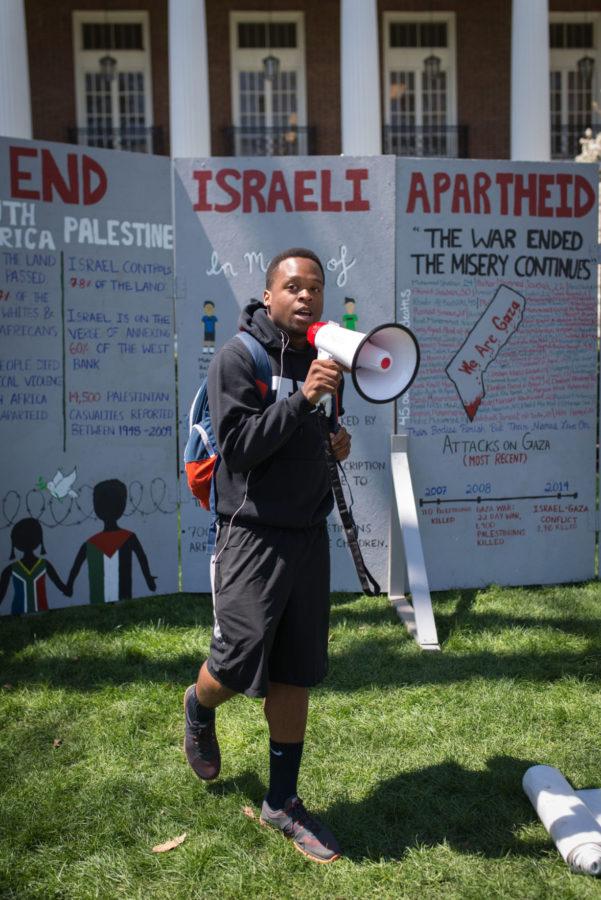 Zaid Hameed, junior in LAS, speaks about Israeli Apartheid in front of the English building at the Main Quad Tuesday.

University students on campus are highlighting the issues concerning the Israeli-Palestinian conflict through the internationally recognized Israeli Apartheid Week and Israel Peace Week.

According to the Israeli Apartheid Week website, the goal of the week is to educate people about the apartheid system in Israel and “to build Boycott, Divestment, and Sanctions (BDS) campaigns as part of a growing global BDS movement.”

Students for Justice in Palestine, a registered student organization, hosted events to celebrate the Israeli Apartheid Week, and Layla Fattash, advertising head for the RSO and sophomore in AHS, said the goal of the week is to get people involved and educate them about what is happening in Israel and Palestine.

At the end of week, she said the best part is when people come up to the group and give thanks, stating they support them.

Fattash, whose parents are from Palestine, said even if people are not interested in the Israeli-Palestinian conflict, they should be aware.

“These are human beings that we’re talking about,” Fattash said. “We can put religion aside. We can put political views aside, but there are like definite human right violations that are going on over there against the Palestinian people.”

Israel Peace Week is also being celebrated on campus this week.

Josh Cooper, senior in LAS, is president of Illini Public Affairs Committee, or IlliniPAC, a pro-Israel lobby group, which reaches out to student leaders on campus and local members of Congress to talk about how important a strong U.S. and Israel alliance is.

Cooper wrote in an email that Israel Peace Week at the University allows those in support of Israel to come together as a community and celebrate how Israel contributes to the U.S. and the world. He said it’s an opportunity to educate people about Israel and how the state is striving for peace.

Regarding events featured this week on campus for Israeli-Apartheid Week, Cooper said he is not opposed to dialogue about these issues.

“However, I am extremely opposed to the attempt by those who organize Israeli-Apartheid Week to intimidate and bully pro-Israel students on our campus by erecting a wall filled with hate speech and lies, as well as the malicious intent of that group to misinform UIUC students on the issue in order to delegitimize and demonize the Jewish state of Israel,” Cooper said.

The Israeli-Palestinian conflict dates back to the end of the 19th century over land, according to the Middle East Research and Information Project. From the end of World War I to 1948, the land was internationally known as Palestine, but in 1949, the land was divided into the State of Israel, the West Bank and the Gaza Strip, which caused conflict as both sides believe the land is their own, according to the organization.

Yarah Kudaimi, a 2014 University alumna, was a member of the Students for Justice in Palestine during her four undergraduate years.

Kudaimi was born in the U.S., but her parents are from Syria, and she has Palestinian friends.

She said although the Middle East is not exactly close in terms of distance to the University, the Israeli-Palestinian conflict affects students at this campus, such as how American tax dollars go to the conflict.

According to the Congressional Research Service’s report on U.S. Foreign Aid to Israel, since World War II, Israel has been the largest cumulative recipient of foreign assistance from the U.S., totaling $121 billion to date in assistance. The report also stated most of the aid has been in the form of military assistance.

Kudaimi said the University is involved with companies involved in the Israeli-Palestinian conflict, such as Caterpillar Inc., a manufacturing corporation which has a stimulation center in Research Park.

Fattash said the issue is involved with the boycott, divestment, and sanctions campaign to have the University divest, or boycott, from Caterpillar, but she said it would be hard to get the University to follow through with this.

Kenneth Cuno, associate professor of history, gave a presentation Tuesday night for Israeli Apartheid Week about U.S. policy toward the Israeli occupation of the Palestine territories.

Cuno is teaching a Palestinian history course this semester and said many students that come into his class don’t know much about the Middle East.

He said there are students on campus affected by the Israeli-Palestinian conflict out of interest for the topic and many students have family from the Middle East, while others are affected due to religious reasons.

Shani Benezra, member of IlliniPAC and freshman in Media, said when it comes to the Israeli-Palestinian conflict, there is no easy solution.

Benezra’s parents are from Israel, and said when she calls her grandmother, who lives near the Gaza Strip, she finds herself asking ‘How often are you running to the bomb shelters?’

She said although the Students for Justice in Palestine have not specifically said they do not recognize Israel as a state, she feels that it is what they believe, which directly impacts students at the University.

Benezra said there are disagreements between both sides, but she feels the violence has to stop.

“I pray that one day all these wars will stop.” Benezra said. “No one wants this war to keep going on.”

Clarification: A previous version of this article stated Kenneth Cuno, associate professor of history, gave a presentation Tuesday night for Israeli Apartheid Week about the history of Israeli Apartheid and foreign policy. The article should have stated Cuno presented on U.S. policy toward the Israeli occupation of the Palestine territories.