The basics about Biden’s visit 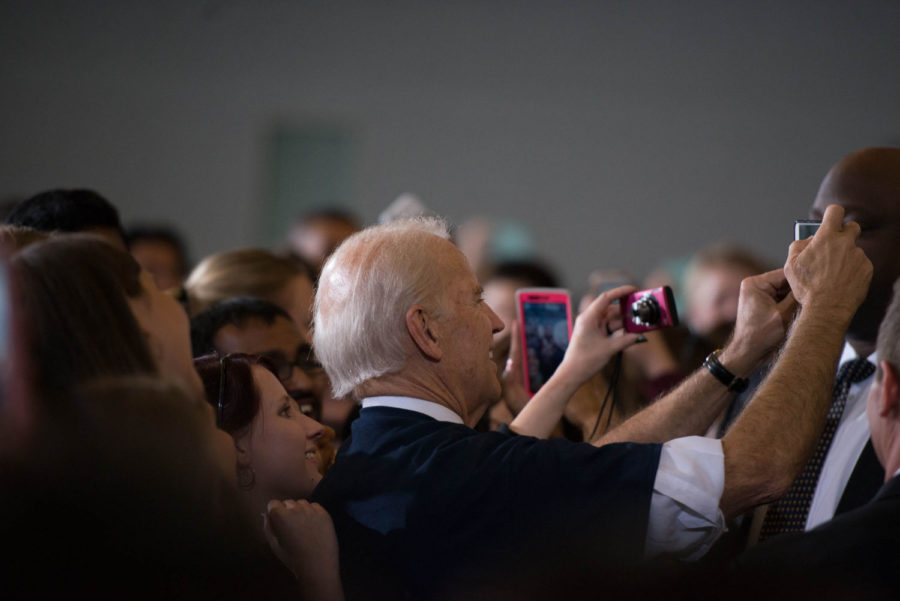 Vice President Joe Biden greets University students at Campus Recreation Center East on Thursday after speaking about the “It’s On Us” campaign and its developments since its 2014 conception.

Vice President Joe Biden will speak to students and deliver remarks about preventing sexual assault and specifically, the “It’s On Us” campaign at Campus Recreation Center East, at 1 p.m. Thursday. The initiative aims to make college campuses more able to prevent sexual assault.

In the week leading up to Biden’s appearance, students were able to sign the “It’s On Us” pledge on the Main Quad and members of the Illinois Student Senate decorated the Alma Mater in patriotic and “It’s On Us” decorations.

According to the campaign’s official site, the pledge is “a personal commitment to help keep women and men safe from sexual assault,” and “serves as “a promise not to be a bystander to the problem, but to be a part of the solution.”

“It’s sort of an ‘It’s On Us’ rally to celebrate what we’ve been doing here at Illinois,” Hill said. “To celebrate success and keep building momentum around the cause.”

Hill said the event is intended to empower students. The University is among the top participants in the campaign, which the White House launched in 2014.

Rep. Rodney Davis, R-13, announced Wednesday that he will be appearing and speaking alongside Biden at the event. Ashley Phelps, Davis’ communication director, said it is standard for the local state representative to be included at such events.

Phelps also said this cause “really hits home” for Davis because his daughter will be leaving for college in the fall.

Willard Airport and the University of Illinois Police Department have spent the week preparing for Biden’s arrival. Willard Airport Manager Steve Wanzek said no press or public will be allowed at the airport when Biden arrives in Air Force 2.

Wanzek said the motorcade will leave the airport and cause certain intersections to close for a short period of time while Biden travels to CRCE.

Patrick Wade, UIPD spokesman, said the police department and Secret Service worked together to ensure “everyone is very comfortable” on Thursday.

There were no specific details available about Biden’s arrival and schedule due to security concerns, but “people should expect to see a couple more police officers and some different security measures in place,” Wade said.

The last White House visit to the University was in January 1998, when former President Bill Clinton appeared alongside his Vice President Al Gore. Clinton spoke at Assembly Hall and addressed new programs introduced during his State of the Union address the night before.