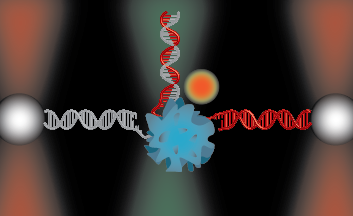 University research teams are working together to study helicase, searching for new uses for the repair protein. There are hopes that it may be useful to many biological systems, including premature aging, birth defects and cancer.

University researchers are exploring new possibilities for uses of helicase, the repair protein in DNA.

By using a new laboratory technique which can detect the structure of enzymes and measure the DNA unwinding process simultaneously, two research laboratories in the University collaborated to study the relationship between the structure and function of specific proteins called helicase, which is critical in DNA sequencing and the DNA repair system.

“Helicases are a large family of proteins that exist in all living organisms. These enzymes can unwind the double stranded helix of the DNA like a zipper,” said Sinan Arslan, primary researcher and the postdoctoral research associate in Ha’s laboratory.

His group is studying two different types of helicase, Rep and PcrA, and associate professor Yann Chemla’s is studying another, UvrD, but both are in the same class of helicase.

Taekjip Ha, a professor in the College of Engineering, and Chemla discovered there are two structures of helicase, open and closed, but the closed helicase is the functional structure. They attempted to respond to debates in the community about the helicases.

Chemla said the innovation has the potential to be applied to several biological systems but will also hopefully answer questions people haven’t been able to answer before. He said it will also have the potential to regulate the activity of helicase — which is critical to DNA repair — in cells.

Arslan said the study of super helicase could be used for purposes beyond DNA repair, as well.

He said they wanted to develop the super helicase into a diagnostic tool that makes it easy to detect the pathogenic organisms, such as HIV and Ebola, under every condition without the limits of temperature.

He said, for example, the process for detecting Ebola could be expedited to take a matter of minutes, rather than 21 days. Arslan said people could add a sample of possibly infected material into boiling water and dip a strip of paper made of super helicase to confirm whether the material is infected. If a pathogenic organism, like Ebola, existed in the material the paper would change colors.

Additionally, Ha said the super helicase is able to kill cells by completely unwinding the DNA.

“My fantasy is to do the same with the human enzyme and then maybe you can use this trick to kill cancer cells,” Ha said. “If you put this super helicase into human cells and target them only to the cancer cells. Maybe the cancer cells will die.”

Chemla said the research is fundamental to understanding how nature works and will provide insight into the inner workings of the human body.