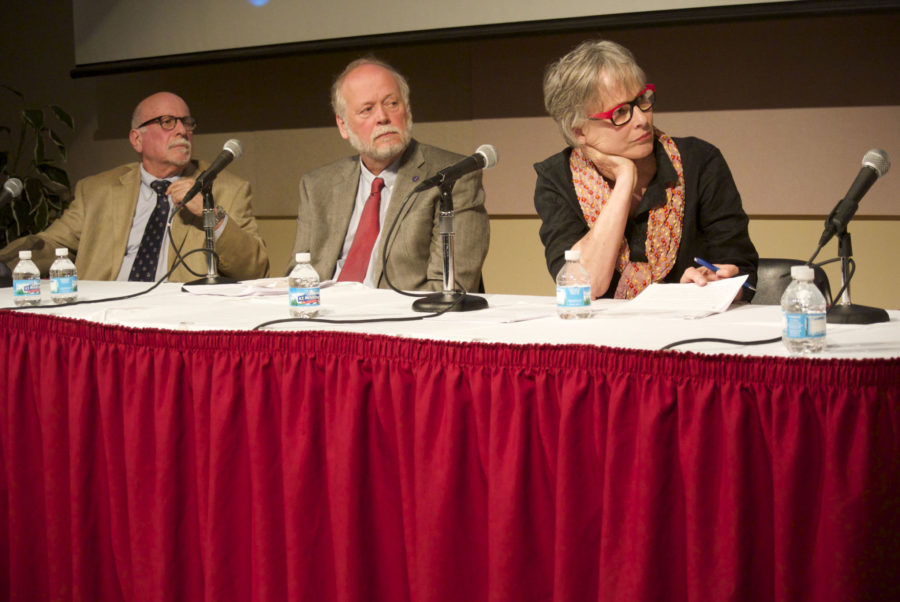 AAUP censure panelists (from left to right) Matthew Finkin, Roy Campbell and Susan Davis listen to guest panelist Andrew Ross speak on the University’s potential for censure via Skype, at the Spurlock Museum on Tuesday.

The American Association of University Professors censure could be a stain on the University’s reputation or a chance to start new, depending on perspective.

Roy Campbell, Senate Executive Committee chair, said he sees censure of the University administration by the American Association of University Professors as a “black mark” on its reputation. Dr. Susan Davis said she sees it as an opportunity for change.

Davis, professor of communications and a member of the Campus Faculty Organization, said she actually hopes for censure.

“I would see censure as a terrific opportunity to take a very realistic, not PR (public relations) look, at the state of freedoms on our campus,” Davis said.

Davis spoke on a panel discussing the consequences of AAUP censure Tuesday night. She was joined by Campbell; Matt Finkin, former AAUP Committee A member and professor in Law; and Andrew Ross, president of the New York University chapter of the AAUP. Ross, who publicly boycotted the University for how it handled the rescindment of Salaita’s appointment, joined the panel discussion via Skype.

The University is “likely” to face AAUP censure, Finkin said. The AAUP released its first official report about the University’s handling of Salaita’s dismissal Tuesday. The report concluded that Salaita’s rights were violated.

The AAUP will officially vote on whether to censure the University at its June 13 meeting in Washington D.C.

In August 2014, after Salaita posted controversial tweets regarding the conflict in Gaza, Chancellor Phyllis Wise emailed Saliata, informing him the Board of Trustees would not approve his appointment as a tenured professor in the American Indian Studies program.

The University faced censure only once in its history; in 1963 Professor Leo Koch was dismissed after writing a letter published in The Daily Illini defending trial marriages and premarital sex.

“We learned very little from the episode of censure in 1963,” Finkin said. “I view the situation unfolding with considerable dismay. How did it come to this? Was there no one aware of the consequences of these actions?”

“I think you’ll find the senate has been very active in trying to pursue a number of different resolutions,” Campbell said.

In terms of reversing AAUP censure, Davis said a reasonable first step would be offering Salaita employment, even though she thinks it is unlikely.

“I want the administration to make unequivocal statements about the right of faculty to make opinionated speech in their classrooms as long as they are fulfilling their jobs,” Davis said.