Four years later: The end of a term 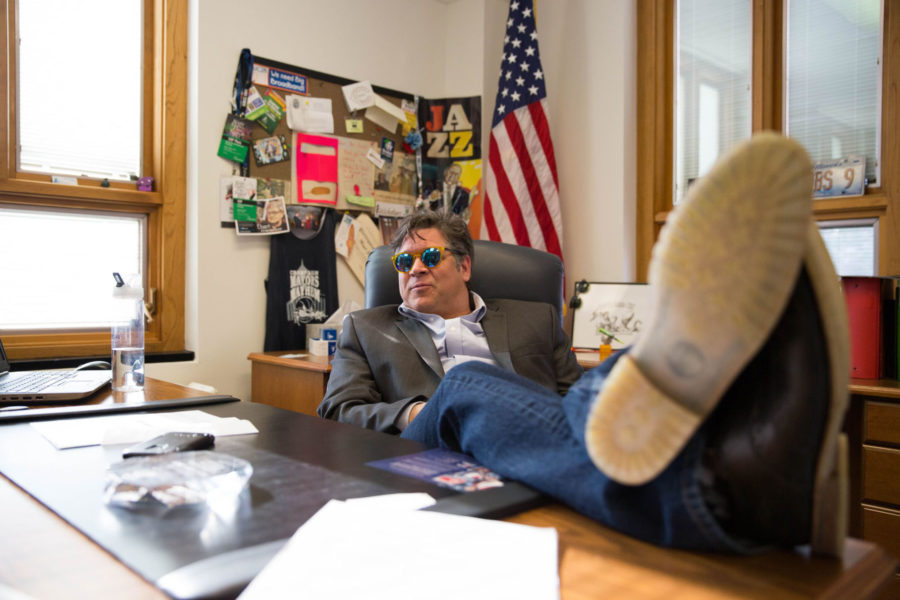 Don Gerard said his final goodbyes to the community before his office pictures were packed away and his suit jackets were hung up in his office on the last Thursday of his term.

His day started like any other. He finished his shift as facilities manager at the University, a job that he held before his term as mayor. He walked through the Krannert Center for the Performing Arts in jeans and a suit jacket, ordering his lunch while still wearing his yellow frame, blue lens sunglasses. He was stopped every few minutes by random passersby.

“You all right?” said Mike Ross, director of Krannert Center.

“I’m fantastic!” Gerard said, a genuinely optimistic response that was felt no matter who he was talking to.

That afternoon, as he sat down to enjoy his sandwich at Intermezzo Cafe, Gerard reflected on his term as mayor, a four-year span that allowed him to gain a different perspective on the community, for better or for worse.

“The first time I did a ride along as mayor with the police, I told the officer, ‘This isn’t my first time in a police car, but it’s my first time I’ve been in the front seat,’” he said. “You make mistakes, but you can be anything.”

After four years in office, Don Gerard lost his bid for reelection to Deb Feinen on April 7.

Before his mayoral term, Gerard was a self proclaimed “punk rocker,” reinventing a new, political side that he never thought existed.

Gerard expressed that over his term, he just wanted to be a mayor for the people, a mayor that represented everyone, regardless of race, class or gender.

But being mayor for the people also means facing criticism. Recognizing his Twitter debacle with ESPN’s Dan Dakich, legal battle with an ex-girlfriend and a misunderstanding from a campaign employee, he has made mistakes. But Gerard said he realized over his term that being mayor wasn’t about him or his ego — it was about being the face of Champaign and trying to make citizens feel good about their city.

“People hate politicians, but they want to like them, so when they do, you can’t let them down,” he said. “I wanted to dignify people who felt disenfranchised the previous 12 years, who felt frustrated and angry.”

Though Gerard felt he did as much as he could to represent the underrepresented, he expressed that he could never make everyone happy. In local Champaign publications, headlines criticized his every move, an aspect of the job that not only took a toll on Gerard, but his family as well.

“I don’t want to speak for her, but I think (my daughter) was overwhelmed by it all. I’ve embarrassed my kids, but imagine it being on the front page of the conservative press that will paint an unattractive portrait to begin with,” he said.

He spoke about his son, who has not only grown taller than Gerard over his term, but has also developed a thicker skin and grown an appreciation for politics. He’s “a little democrat,” as Gerard would describe him.

Despite the media spin and embarrassment, Gerard reflected on the times that outweighed the negatives, finding light in a particular moment during his term that made the past four years well worth it, when a man came up to hug him after a church service one Sunday.

The man expressed his gratitude toward Gerard, stating, “Everything’s better since you became mayor! Everything is better!”

Gerard was flattered from the man’s kind words but was later informed that he was Albert Carrington, a man who lived through the greatest tragedy as a parent. His son, Kiwane Carrington, was shot and killed at 15 years old by a Champaign police officer in 2009.

That moment made Gerard realize that he achieved his goal of changing and reaching out to a community that was ignored from previous mayoral incumbents.

“I’ll never be rich — I’ll never have really nice things, but it doesn’t matter at all,” he said. “I’ve had these moments and feelings and experiences in life that I’ve shared and connections that have made me feel genuinely alive and genuinely a part of something bigger than myself.”

Back at his office, while still wearing his yellow sunglasses and gray suit jacket, Gerard lifted his feet onto his desk. The mayoral office inside the City Building was business casual, a feeling that was relatable and comfortable to all people.

Later, Gerard invited Mary Beth Wynn and Kaden Orr, part of a Mahomet family who recently lost their home in a devastating house fire, to visit his office.

“Who signed all your baseballs?” said 11-year-old Orr, as he sat spinning in the mayor’s leather chair.

“Do you need boxes to pack up all your stuff that you have in here?” said Wynn, Orr’s mother.

During their first time visiting Gerard’s office, Orr and Wynn were curious about the toys cluttering his shelves and window sills, as well as the stories behind the many pictures hanging on his walls. They were moments capturing Gerard’s encounters with actors, musicians and individuals that changed the world, such as Bob Metcalfe, a co-inventor of the Ethernet cable.

“Time to go to the STAR awards,” Gerard said around 6 p.m. in regards to a ceremony, which awarded unsung heroes around the community, that he would speak at.

When Gerard walked into the award room, audience members’ faces lit up. He knew everyone and everyone knew him.

During one of the last times he would be speaking to a crowd as mayor, Don Gerard ended the evening with a speech that would honor the awarded. Emotions ran high.

Though his term might be over, his legacy to connect with the community will live on.

“Whether it’s stopping on the street to take a selfie with somebody or speaking at a celebration of life for someone, you have to be a pillar who stands for people who they want to believe in.”