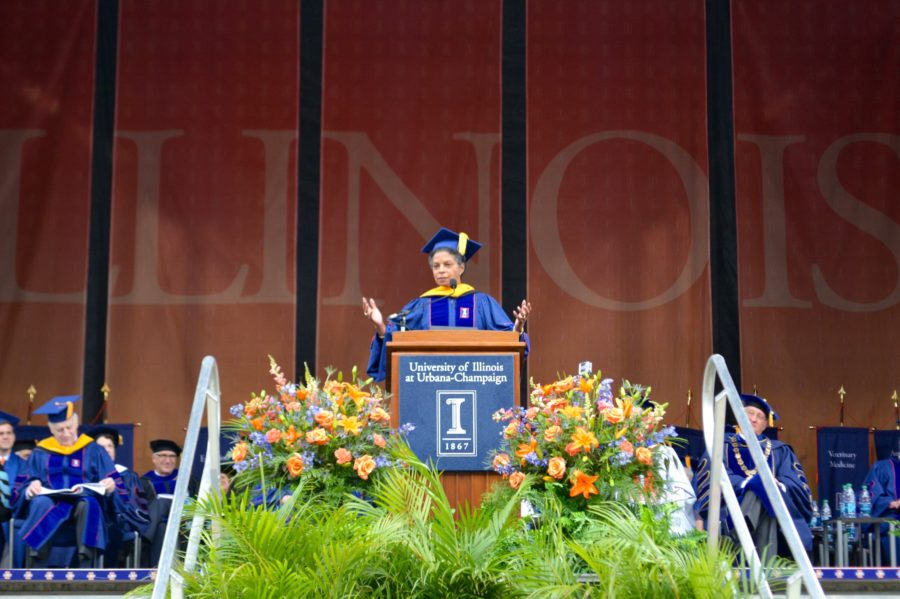 Rain showers couldn’t cloud the excitement of graduates and their families as they attended the University’s 144th campus-wide commencement ceremony on Saturday at Memorial Stadium.

The event opened with a speech by Chancellor Phyllis Wise, who shared her hopes for the graduates.

“I hope that your experiences at Illinois have transformed you and that you are not the same person who walked onto this campus a few years ago,” Wise said. “I hope you believe that you can’t change the world by standing still. Living a life of impact is measured by the people you touch (and) the communities you make stronger.”

A speech by Edward McMillan, chairman of the Board of Trustees, followed. McMillan made remarks to the graduates about the importance of diversity at the University.

“In part, because of that diversity, we are a shining monument to excellence and innovation,” McMillan said.

Before sharing a few remarks on his time at the University, University President Robert Easter gave a welcome to incoming President Timothy Killeen.

“Today’s commencement will be etched in my memory, just as yours is,” Easter said. “It’s the last of more than 40 years that I’ve been at the University of Illinois.”

Easter then shared some advice to graduates on achieving success.

“Decide what your passion is, and follow it,” he said. “If you’re doing what you truly love in life, life will never seem like work, and work will seem like play.”

The presentation of awards and the conferring of honorary degrees followed the speeches. The combined chorus sang two songs before commencement speaker Risa J. Lavizzo-Mourey took the stage.

Lavizzo-Mourey is president and CEO of the Robert Wood Johnson Foundation, the largest charitable foundation in the U.S. dedicated exclusively to health care. Forbes named Lavizzo-Mourey one of The World’s 100 Most Powerful Women for the past two years.

Lavizzo-Mourey first asked graduates to stand and give a round of applause to all of their friends, family, professors and supporters.

She then began her speech by thanking graduates “for entering the field of health.”

She went on to explain that: “Health isn’t only about curing illness or choosing the right food or exercising. It’s the bedrock of your personal fulfillment. It’s the backbone of our nation’s prosperity. It’s an essential part of everything we do. And right now, the state of our nation’s health is not exactly a badge of pride.”

She then called upon graduates to step in and make the necessary changes to improve the nation’s health.

“And now, it’s your turn to take the lead,” Lavizzo-Mourey said. “And I’m so very glad you are.”

Lavizzo-Mourey finished her speech by reciting Alice Walker’s poem “The Nature of This Flower is to Bloom.”