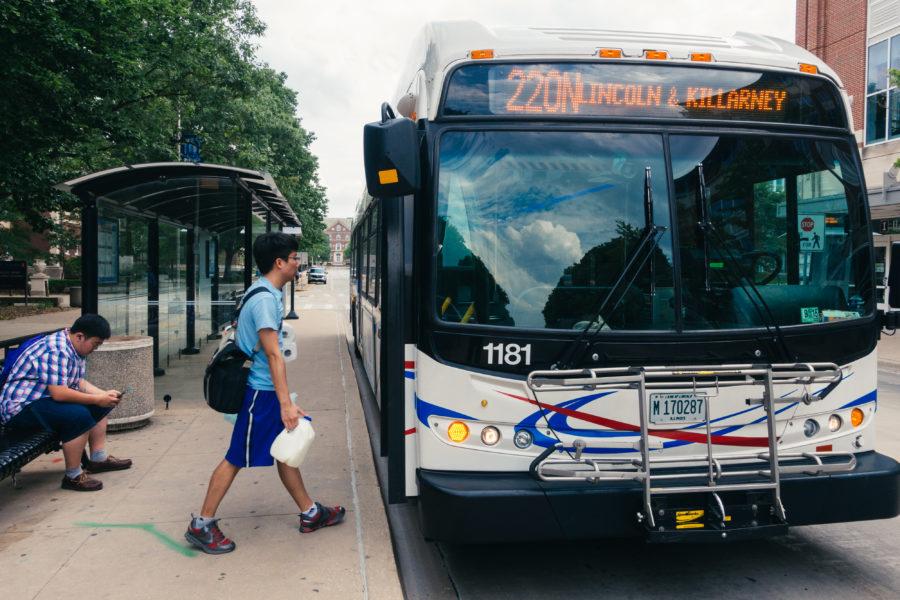 A student boards the 220N bus at the Transit Plaza.

The Champaign-Urbana Mass Transit District has proposed changes to many of its bus routes and is looking to increase fares for this fall.

On Wednesday, MTD held a public hearing at the Illinois Terminal where interested community members could give the company input on the proposed changes.

Seven routes are being changed: the Yellow, the Red, the Green, the Orange, the Grey, the Brown and the Pink routes.

Drew Bargmann, special services manager at MTD, said a lot of the bus route changes stemmed from the transit district’s annexation of the Boulder Ridge and Sawgrass subdivisions in Champaign.

“It was a good opportunity to restructure some things to improve three, four routes with one major change,” Bargmann said.

Heather Simmons, reference librarian at the College of Law, said she will be impacted by the annexation of the subdivisions. Her subdivision, Sawgrass, will receive full bus service, but her property taxes were raised to pay for it.

However, she said she is very happy that she will be able to go home from work whenever she wants during the day and go back again.

“It’s very important to me to be able to ride the bus to work, and this gives me even more flexibility,” she said.

Her husband, Jim Simmons, a former visiting lecturer for the Department of Political Science, said he did not want to be annexed and pay taxes for the service, but he is glad the full service will make it easier for his son to get to and from high school and other activities.

“Quite frankly, it will make it easy for us as a three-driver family to get by with just one car,” he said.

Some people who came to the public hearing had other concerns, as was the case with Vincent Hunt. Hunt, a loader at Wal-Mart, said he was concerned with the reduction of services he has to deal with every summer.

“I bought my bus pass, $72, mainly so I can get home at night when I get off at one o’clock, but there’s no late nights in the summer because the U of I classes stop,” Hunt said. “I’m trying to find another alternative for transportation home because it’s a long walk if I have to walk – when I have a bus pass in my pocket.”

The Air Bus, MTD’s service to Willard Airport, will also be discontinued after Aug. 31.

Jay Rank, planner at MTD, said that because of issues with funding, MTD decided there was not “high enough ridership to continue.”

“It won’t be available to (students) anymore … so they’ll have to come up with a different way to get to the airport,” Rank said.

However, a new route, the Raven, will be added on campus. Bargmann said the decision was supported in the student referendum from the Illinois Student Senate’s ballot in the spring.

“The point of that route is to serve Vet. Med. and the rest of the campus, and to improve the Gold and Silver routes by taking that part of the route off of the Silver to give it more recovery time at PAR,” Rank said. “The service will be covered with the Raven.

“It’s about the smallest loop you can make around campus, and that was done intentionally to get back and be able to do it in a half-hour loop,” Rank said.

MTD also proposed an increase in its bus pass fares. If passed, it will raise the cost by a dollar a month.

According to Bryan Smith, chief operating officer at MTD, the annual pass used to cost $235 in 2007 and was reduced to $60 in 2009. He said MTD has been raising the pass price by $12 over the years when needed.

“The goal was to try to get more people to buy the monthly pass,” Smith said. “That worked, but we also need to be realistic … we have increased costs every year, and those costs in part need to be borne by the folks who ride the bus.”

Smith said the passes’ increase in price will not be finalized until MTD has gathered the information from Wednesday’s public hearing. He said they will also take into consideration the impact of those prices and if anybody has any alternative suggestions.

However, the proposed fare prices will not impact University students.

“We have a separate contract with the University of Illinois that pays for the service that they receive, so these fares are not attached to what the students pay,” Smith said.

Tweet: MTD will add a new route to campus while changing other routes. The company also proposed an increase in fare prices.