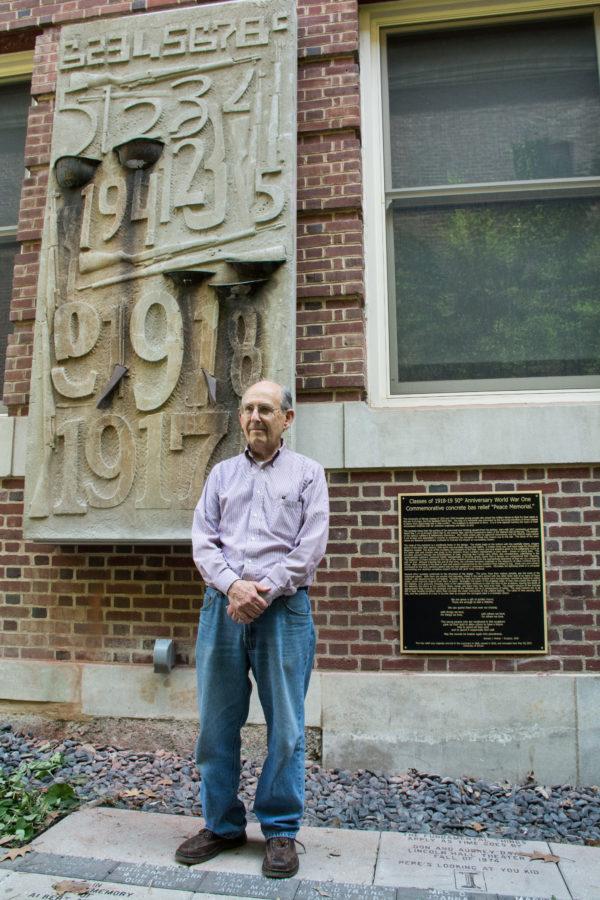 Donald Molnar, sculptor, stands by his recently-remounted Peace Memorial sculpture in the Lincoln Hall courtyard on May 29.

After five years of waiting, Donald J. Molnar was able to see his sculpture return to the south courtyard of Lincoln Hall.

“To have it back, you can’t imagine how good I feel about that,” Molnar said. “When I found out it was going to be uprooted from here, and they were going to change this whole court, I thought, ‘Man, that will never come back.’”

In 1968, the University of Illinois’ classes of 1918 and 1919 requested Molnar, who was a campus landscape architect at the time, to build a memorial commemorating the 50th anniversary of the end of World War I.

The sculpture, titled “Peace Memorial,” was brought back into the south courtyard of Lincoln Hall on Friday. According to Melvyn Skvarla, campus historic preservation officer in charge of the relocation project, returning the sculpture cost $37,000.

The Office of the Chancellor funded the relocation efforts with its fund of discretionary spending.

Molnar said he designed a memorial that went across the whole south courtyard. He envisioned a sculpture behind a fountain, but he had no idea what that sculpture was going to be.

The sculpture was removed from the south courtyard in 2010 when renovations to Lincoln Hall began. According to Skvarla, the fountain was cut off from the bottom of the sculpture because it created a pool of stagnant water.

“Peace Memorial” was put into storage at the Printing Services Building.

Donna Huls, administrative aide in the LAS dean’s office, said there was a lot of opposition to the return of the sculpture because many viewed it as a glorification of war.

“We’re excited to have it back home. It’s going to be in the same courtyard but in a better spot where everybody, when we go out to sit, will be aware of it,” Huls said. “That bronze plaque (next to the sculpture) will give you more information if you just were to happen upon it, and you wouldn’t understand why the bayonets, the helmets — it doesn’t represent war.”

Since he built the sculpture during the time of the Vietnam War, Molnar said he did not mean for it to be a peace or a war memorial. He meant for it to be more of a time machine.

“I did not feel like I had an obligation to soldiers or to heroes of the fallen; I was just trying to tell a story,” Molnar said. “It being during a war period just helped it make more sense as far as the fact that you can’t run away from it. It happened; it will happen again. It will happen again, but we all should be thinking about it at least.”

The sculpture is made up of many numbers. Molnar said that his idea was to “present the dates that their class was involved in a war and look into the future.”

The sculpture begins with 1917 at the bottom, followed by the years of World War I, World War II, the Korean War and the Vietnam War.

As the numbers move up on the sculpture, the typeface becomes more simplified until the numbers are digital in appearance. The last number at the top of the sculpture is cut off because that was where the Vietnam War was at the time the sculpture was built, Molnar said.

“It’s serious business when you have to do one of these complicated (numbers) to tell in the news how many people died today, but it’s simpler when they are mechanical numbers farther up, and it’s real easy if they are just digital numbers that come out of a machine,” Molnar said. “There’s nothing personal about that, and I thought this is a good way to help people worry about this.”

“Middle of the morning that we told them to come, when I was pushing other stuff into the sand … both doors opened, and in marched a troop from the Armory, full dress uniforms, guns at ready, just like they are supposed to be,” Molnar said. “Marched them down here, identified themselves, handed me each gun in turn and I take it and (press it) down into the sand, hand it back. They do the next one. They got all done, dusted them off and marched out again.”

The sculpture was built where it was displayed. On Friday, Molnar returned to the south courtyard where he built the sculpture to see it displayed there again.

A crane was positioned on the parking lot between Lincoln Hall and Gregory Hall to lift the sculpture, which weighs over two tons, over the roof of Lincoln Hall and into the south courtyard.

According to Skvarla, a lot of safety precautions were taken during the project. The parking lot was closed off from the public, and people were not allowed to walk on the south side of the building when the sculpture was going over the roof. Skvarla said if the sculpture were to fall, it would land down in the basement of Lincoln Hall.

Once inside the courtyard, the sculpture had to be carefully mounted to an exterior wall. Holes were drilled on the bottom of the sculpture to secure it. When the sculpture was almost into place, the bottom detached and swung back. The situation was quickly reverted, and the sculpture was put back. Once it was secure, a bronze plaque was drilled into the wall next to the sculpture. The whole process lasted about four hours and was completed by Terry Dowd Inc. of Chicago and Custom Service Crane of Mahomet.

Terry Dowd, president of Terry Dowd Inc., said that his art moving company is always very sensitive to the work they install. Dowd said meeting Molnar gave him a sense of completion.

“I always feel that artwork is really meant for the public,” Dowd said. “Instead of having it stored in a warehouse somewhere, to get it back into public view and for public appreciation gives me a great deal of satisfaction.”

Molnar was not alone to see his sculpture return to the south courtyard of Lincoln Hall. His wife, Carol Molnar, and grandson, Jim Camacho, accompanied him.

“My wife had been all the way through all the stuff I worried about and fretted about, the design and making all the details,” Molnar said. “We’d been in the court a lot then when we were younger, so it was a shame to see it gone, but I’m happy about how it’s come back. This is really nice. It’s totally different, but it’s very nice.”

Check out a gallery of the Peace Memorial’s installation here.