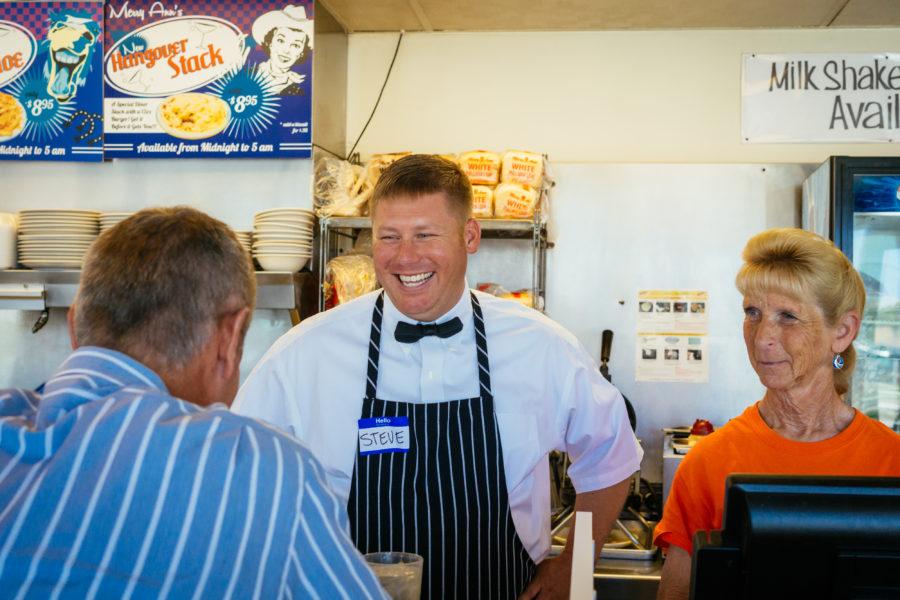 Steve Gardner, a financial planner, chats with a customer at Merry Ann's Diner on Tuesday, June 2.

A fundraiser featuring local celebrities helped out the Summer Youth Employment Program this week. This was the second year the event, hosted by Merry Ann’s Diner, has been held.

All of the proceeds from the fundraiser benefitted the program, a six-week career exploration and job sales training program for Unit 4 students ages 14 to 19. The program, a partnership between the Unit 4 School District and the city of Champaign, has been around since 2011.

Anthony Pomonis, chief operations officer at Merry Ann’s Diner Inc., came up with the idea for the fundraiser while thinking of ways to give back to a philanthropy that needed more attention in the community.

“We thought we can attract attention and attract dollars to this wonderful group of people at Unit 4, and we can raise some money,” he said.

Pomonis said it costs $1,000 to pair up a Unit 4 student with a local business. He said that because of a lack of money to pair up every student who applies for the program, there has been a waitlist.

Lucenda Barnes, SYEP planner and soon-to-be assistant supervisor, said the program is accepting 180 students this summer. She said SYEP looks at a student’s GPA, attendance and behavior from the past two semesters to select the students for the program.

“We work with about 60 to 70 local businesses that employ our kids for the summer, but we pay our students directly,” Barnes said. “That’s what we need the additional funding for.”

Last year, $6,000 was raised for the program. Barnes said this year’s fundraiser is on track to reach their current $10,000 goal.

Pomonis said there are about 30 waitlisted students, so raising $10,000 would still only get 10 students off of the waiting list.

“Our local celebrities are kind of the big heads in the community, so for them to come in and learn about the program and spread the word, that means it gets to more people,” Barnes said.

Public officials and other influential members of the community washed dishes, took orders and served customers behind the diner’s counter. Some volunteered for the whole event, and some worked 30-minute shifts.

C. Pius Weibel, a recently-retired geologist at Illinois State Geological Survey and member of the Champaign County Board, has volunteered both years the fundraiser has taken place.

“I think that summer jobs are important for young people,” Weibel said. “If they are not doing anything or hanging around, kids get into trouble, so I think that summer employment is good. Plus, they learn how to work under somebody else’s authority, do things right, get there on time and things like that.”

Chris Kloeppel, president of the Unit 4 Board of Education, said participating in fundraisers like the SYEP fundraiser at Merry Ann’s Diner is important.

“Just get out and support something that we are involved with,” Kloeppel said. “If we are not able to do that, then I think things like this die, so I’d love to see the community involvement.”