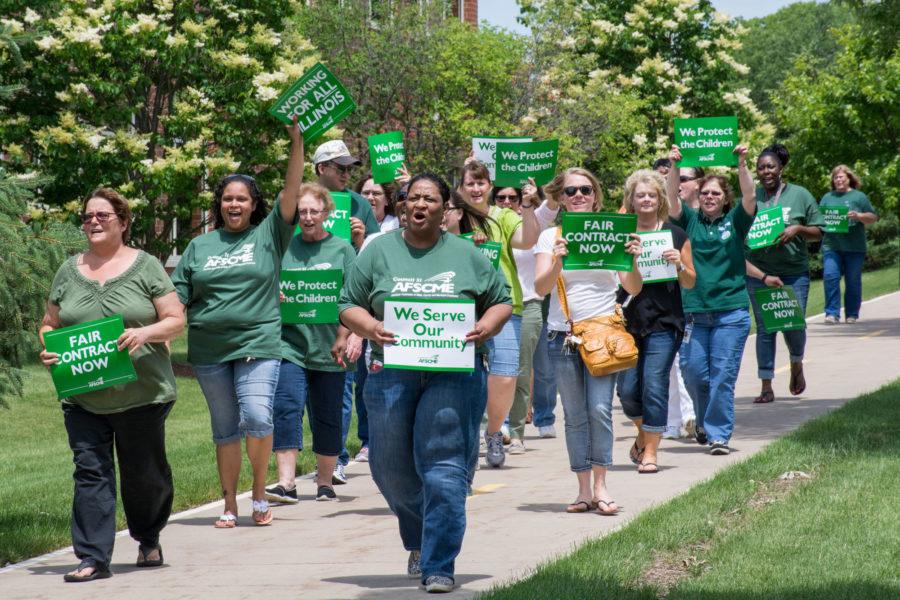 State employees rally and march in support of public services along S. First Street in Champaign on Wednesday, June 10.

Twenty-five state employees from the Champaign-Urbana area participated in the American Federation of State, County and Municipal Employees’ (AFSCME) statewide event urging Governor Bruce Rauner to make negotiations over a new union contract on Wednesday. The rally began at noon on S. First Street in Champaign.

“AFSCME is asking their employees to come out and let the public know that we are fighting for our working class, for middle-class America,” said Arnold Black, president of AFSCME Local 2971 and member of the Department of Children and Family Services. “And that we also would like a fairer contract as well.”

Rebecca Harden, executive board member for AFSCME local 2971, said state employees are looking for a fairer contract, affordable health insurance and want to keep their pensions the way they are.

“It’s going to be a long uphill battle,” Harden said. “And we just want to let the people know that we are out here in support of the bargaining committee and are hoping to get a fairer contract.”

Anders Lindall, spokesman for AFSCME, said the federation wants to resolve the contract to provide its state employees with pay that will prevent the Rauner administration from driving down the middle class’ standards of living.

“The (Rauner) administration is continuing to exist on very extreme and harmful demands that would undermine those public services that Illinois residents rely on and that AFSCME members provide,” Lindall said.

AFSCME has been trying to negotiate with Rauner for six months and, according to Lindall, this is the last month for state employees to push for a new contract, as the current agreement is set to expire on June 30.

“It’s important to reach a fair agreement and a bargaining table without any disruption to public services,” Lindall said. “But we worry that Governor Rauner may be seeking a confrontation that would cause a state government shutdown.”

Lindall said it has been over 40 years since state employees have been forced to strike to meet the terms under which they want to work. He said he hopes that with the events that took place this week, Rauner will stop pushing for a government shutdown, which Lindall said will weaken rights and bring down the wages of public service workers.

Over 100 similar events were planned across Illinois on Tuesday, Wednesday and Thursday. Participants aimed to bring attention to how much service they believe state employees provide for the community.

Yard signs saying “We Support State Workers” were distributed, and state employees called out for honks from cars as they rallied.

On Tuesday, the city of Anna created a human chain of about 400 people to show their support for state workers, Lindall said. Other events in the state included rallies, marches, leafleting and food drives.

“The public response has been very encouraging,” Lindall said. “People understand that public service workers are their friends, and people who provide vital service to their community that deserve a decent wage (and) affordable healthcare for themselves and their family.”