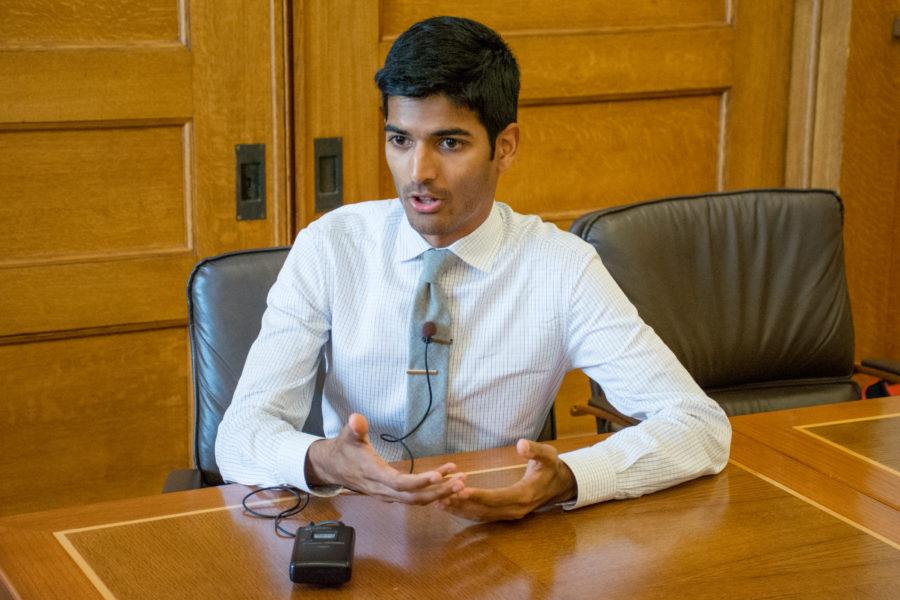 Anando Naqui co-founder of EscaWheel discusses his project and Kickstarter campaign with the media on June June 11.

Their project, EscaWheel, is a lift that makes it easier for wheelchair users to go up and down stairs.

“What we built was more a proof of concept to show that the technology works,” said Anando Naqui, co-founder of EscaWheel. “We’re trying to raise money through Kickstarter for a second prototype, which would be a lot closer to something that you would be able to put in someone’s home; it would have the safety mechanisms, the more advanced control system – an emergency personnel notification system as well.”

Over 20 percent of the project has been backed through Kickstarter so far. The goal is to raise $25,000 by July 2.

“We can use Kickstarter not just to raise the money but also to build awareness for the issue at hand,” Naqui said. “Hopefully, the people who are backing our campaign are a lot more aware of the issues that wheelchair users face on a daily basis because now they are invested in our project.”

If the project is not fully funded by the July 2 deadline, EscaWheel will not receive the money it needs to create a second prototype.

“While we still have a bit of a ways to go to reach our Kickstarter goal, it is clear that there is an interest and certainly an opportunity for EscaWheel to succeed,” said Chris Delaney, co-founder of EscaWheel. “At the end of the day, if EscaWheel is able to improve the life of just one person, I will consider it a success. With the help of Kickstarter, we hope to help many more.”

The EscaWheel team, which consists of Naqui, Delaney and Jake How, started building the first prototype for their mechanical engineering senior design project in August 2011. They completed it by December of the same year.

Naqui said that at the start of the project, he talked with former Illinois wheelchair basketball coach Michael Frogley about the difficulties wheelchair users face, and the biggest thing that stuck out to him was going up and down the stairs in a place of residence.

Frogley, who moved to Canada over a year and a half ago to work as the High Performance and National Academy Director of Wheelchair Basketball Canada, said he made his three-story home accessible by installing an elevator in the house, which cost roughly $125,000.

“I am very fortunate that I have an insurance company that can pay for that,” Frogley said. “That is out of the price range for the vast majority of people … and the EscaWheel has the ability to make … it available for a person to purchase in a home.”

Although the team still needs to analyze the price of the EscaWheel more, Naqui said they feel comfortable pricing the product in the $5,000 to $7,000 range, including installation costs.

The EscaWheel is a wheelchair lift that works in a similar way to a forklift, picking up the wheelchair under the seat using forks, Naqui said.

He said the wheelchair user backs onto the device, which raises about eight inches to a foot, then takes the user up the stairs and rotates 90 degrees, so the user can roll away from the stairs.

“We wanted to create something that kind of had the functionality of a platform lift with the footprint, form factor, and price of a stairlift,” Naqui said.

“We’ve been re-analyzing every part of our design in order to find ways to increase the functionality and decrease the footprint of the device,” How said. “When it comes to the challenge of lifting a wheelchair and user up the stairs, the geometrical constraints become quite challenging.”

Frogley said from the first moment he saw the EscaWheel team’s idea, he loved how they thought about the project in terms of maximizing a person’s ability.

Alumni use Kickstarter fundraising campaign to advance a wheelchair lift project they started at the University.