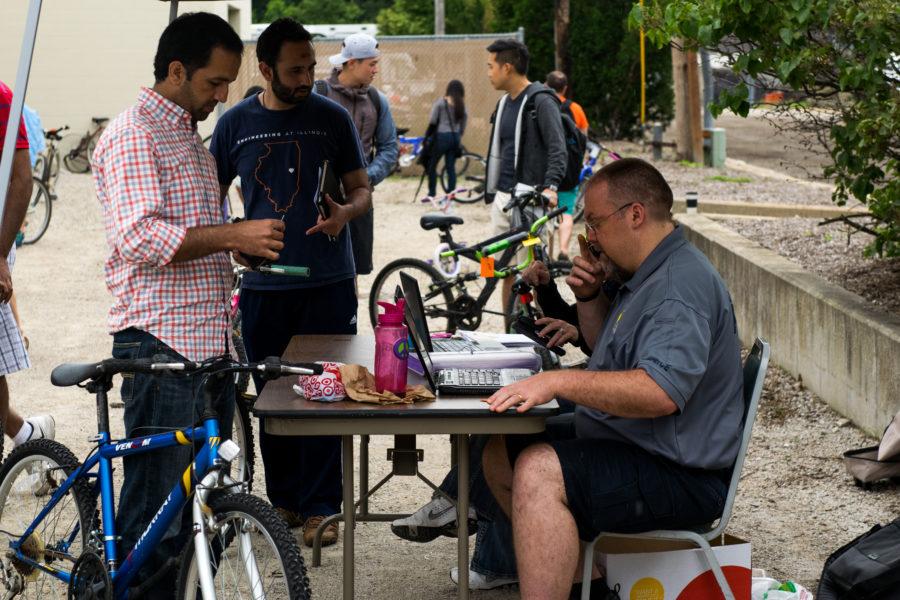 The Urbana Police Department hosted a free bike giveaway on Wednesday. People interested in getting their hands on a bike gathered in front of 704 S. Glover St. in Urbana, where the department implemented a first-come, first-serve system.

Although the conditions of each bike varied, all were used. The Urbana Police Department and Champaign County Sheriff’s Office spent the past year and a half collecting them.

“All these bikes have been abandoned at different spots throughout Urbana,” said Lt. Joel Sanders of the Urbana Police Department, who is also the services division commander. “We have around 10 bikes that came from the Champaign County Sheriff’s department.”

Sanders estimated that around 100 bikes were given away.

“Bikes that are completely trashed will be junked,” Sanders said. “We’ll continue to try and find a home for bikes that are still fixable.”

Though some bikes still needed a few repairs, a substantial crowd arrived at the scene, hoping to bring home a bike of their very own. According to the event’s press release, the Urbana Police Department asked that people only take one bike per person; however, the number of people exceeded the amount of bikes.

Some students from the University also looked to get their hands on a bike.

“I heard about this from my friend, who heard of it from Facebook,” said Monica Ngo, senior in Engineering. “I was looking for a particular racing bike to use on campus, to get from one end of campus to another very quickly.”

The Urbana Police Department hosts an event like this approximately two times a year.

“We do an event every time we have around 100 bikes,” Sanders said. “Maybe every six or seven months.”

The event is open to residents of Champaign County. This winter, the Urbana Police Department or Champaign County Sheriff’s Office is hoping to host another bike giveaway.