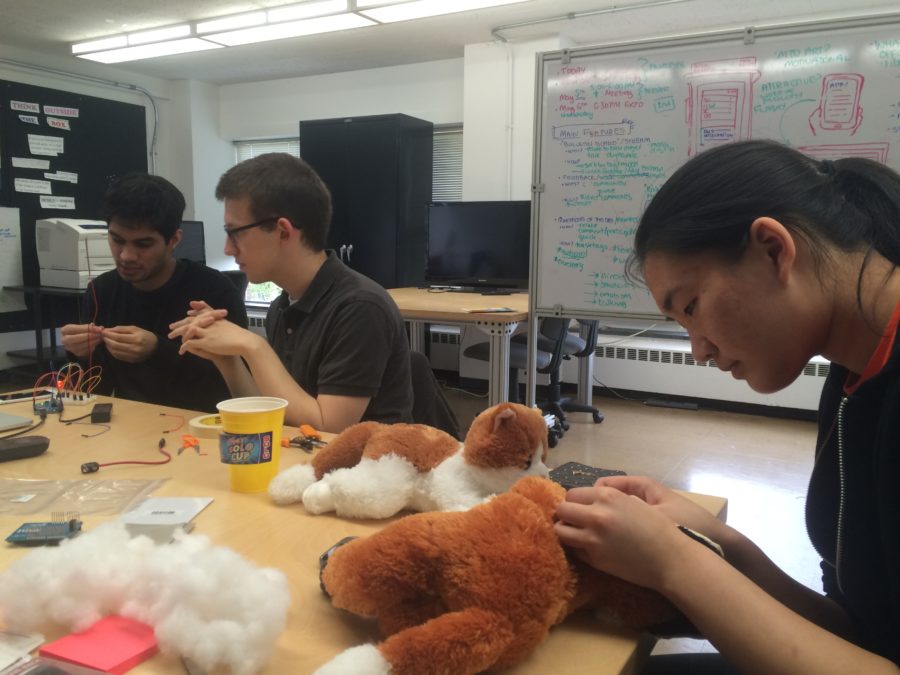 In addition to using the prototype to help others, the group submitted it for the 2015 James Dyson Award. The submission, called “TherapAlz,” stands for therapy and Alzheimer’s disease.

According to its website, the James Dyson Award is a contest that runs in
18 countries, including the U.S., France and Japan, and is open to university students and recent graduates who are studying engineering,
industrial design and product design.

Students have the chance to submit a
design that solves a problem, and if the design wins internationally, the winner
is guaranteed assistance in transforming the prototype into a commercial product.

This year, six Illinois students decided to work as a team. They will hear if their submission is named a national winner in late July.

Sophomore in LAS and team member Fiona Kalensky said the inspiration and
early development of the fox began at the registered student organization Design for America.

“The atmosphere of the club was really enthusiastic (with) people who wanted
to make a difference,” Kalensky said. “One of the biggest things that
Design for America emphasizes is developing empathy for your user. It’s not
like you’re staring at a screen and going through statistics and designing for
someone you’ve never met before. … You have a strong tie and investment in the
project as well.”

Design for America allows teams of Illinois students to identify a problem
through research and user-based interviews and eventually design solutions.

After months of research and
interviews with caretakers and caregivers on how to create the best therapy for dementia and Alzheimer’s patients, the team decided to create a therapeutic fox in March.

The team is still building a prototype. As of now, if a patient pets the fox, the fox will start to purr and vibrate
as if it’s breathing.

Kalensky said the team underwent a lot of trial and error before finally
deciding to design the fox.

“The question we were asked to solve is, ‘How can we decrease the
level of stress seen on an everyday basis for the caregivers for Alzheimer’s
patients,’” Salensky said. “We did a lot of ideating — where you’re constantly coming up with ideas and lashing them
out.”

Ivy Lei, sophomore in LAS and team member, said the team didn’t want to just design a low-cost therapeutic device that is under
$50, but a device that can help lessen anxiety and
stress to both the caregivers and caretakers.

“The main purpose is to bring comfort and provide some form of
stability to the patient or the person who’s petting it,” Lei said.
“We wanted to stimulate the benefit of actually petting a pet, but
without the cost of having a pet.”

Before building the TherapAlz, the team interviewed caregivers and
participated in group interactions with caretakers at Champaign’s Circle
of Friends, an adult day center that provides assistance, activities and supervision for adults who suffer from Alzheimer’s
and memory loss.

Kathy Rhoads, owner of Circle of Friends, said the fox may seem simple at first, but it can really be beneficial to a patient’s health.

“People are caregivers technically, when you think about it,”
Rhoads said. “They’re fathers, they’re mothers and they somehow have
connections with people. We’re social beings … so we use dolls or stuffed
animals like this fox idea because people like to nurture and help
others.”

The petting and purring of the fox are the current main functions that serve
as a positive distraction – providing comfort to the caretakers as well as
lessening stress of the caregivers. Despite this, Lei said the team is still
planning to work on future features for the fox.

“One of the big problems with Alzheimer’s patients is that, if they get
off the bed, they have a very great risk of falling,” Lei said. “So
we were thinking about implementing something in the pet so that when they get
off the bed, the simulator will notice it and then notify the caregiver when
the patient takes off. … That’s the easiest way for a patient to get hurt.”

Arjun Sarode, sophomore in LAS and team member, said although
they wanted to give the James Dyson Award a try, the team is not too concerned
about winning.

“If anything, it’ll help us solidify our vision a bit more and really
get something done in writing to keep us focused and on track,” Sarode
said. “Hopefully by winter break, we can have an actual polished prototype
to give to people, so we can get feedback.”