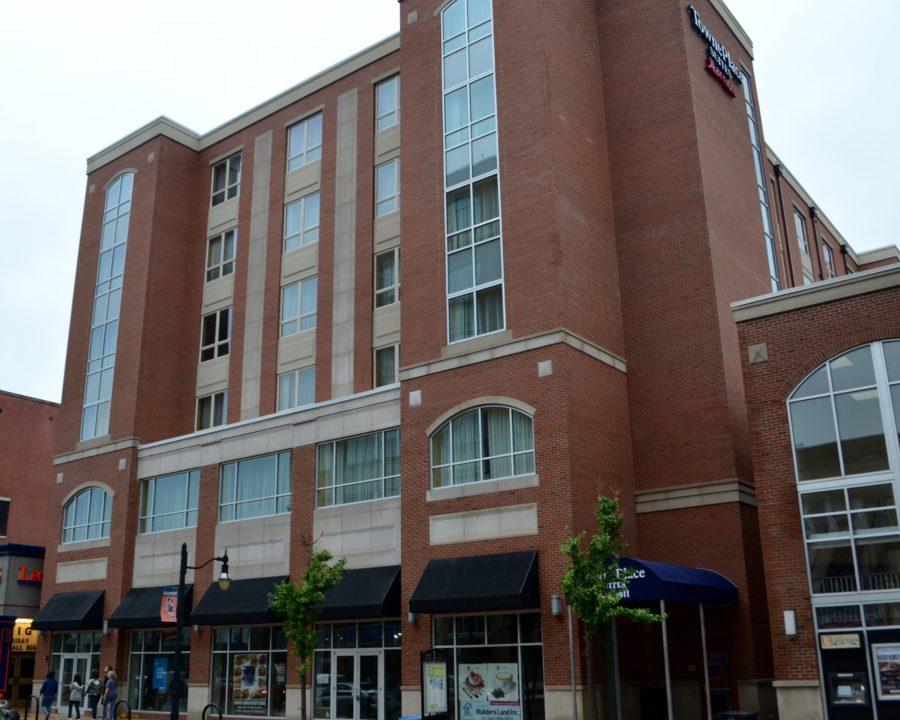 The new Marriott TownePlace Suites on Green Street will open in July.


Green Street has undergone several changes just within the past five years. The heart of Campustown has exploded with building projects and restaurants. Come August 2015, three new apartment complexes, one new parking lot, a hotel and some restaurant changes will greet students and their families upon their return to Champaign-Urbana. Here’s an update of what to expect this fall:

HERE is a 16-story high-rise located at the northwest corner of Green and Fourth streets. It will house 143 apartments with 528 beds. Workers are currently putting the final touches on the building’s structure and say their plan is to complete the job by mid-July.

West Quad is a four-story complex on the south side of Green Street, east of the railroad tracks. It will have 136 apartments with 472 beds. Every unit comes equipped with a 50 inch flatscreen TV. The complex also boasts a swimming pool and hot tub, both facing a Jumbotron screen.

Campus Center is a six-story structure on the northwest corner of Sixth and Green streets. It will hold 88 apartments in a mix of one, two and three bedroom units. Jill Guth, director of commercial leasing and marketing for JSM, said the apartments are approximately 90% leased. Move-in is August 14th. Also part of the Campus Center complex is a new Marriott Towneplace Suites. Guth said the $149/night hotel is accepting reservations for July 2nd and beyond.

Café Bene plans to open its doors later this summer. Campustown’s second location will occupy the first floor of the newly-constructed Campus Center complex on Sixth and Green streets. This high-end, European-style coffeehouse already has a location in Gregory Place, Urbana. Café Bene is the most popular coffee chain in South Korea.

Papa Del’s will move from Green Street to its new location on Neil Street later than expected. Owner Bob Monti said construction hasn’t been as quick as he had hoped. The new location is expected to open this November. Papa Del’s has served up its famous deep-dish on Green Street for over four decades.

The parking lot formerly known as “Lot J,” located on Sixth and Green streets just east of Legends, will not only be home to the Campus Center apartments and hotel rooms, but to a parking garage as well, set to open July 13th. The garage will have hourly public parking spaces available and will triple the previous parking lot’s capacity.