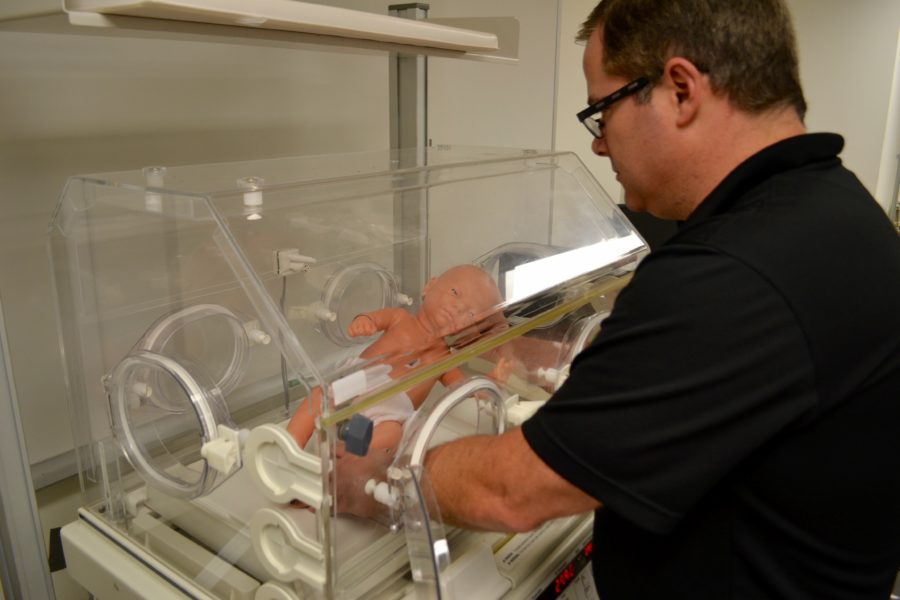 Tony Banks, a member of John Rogers’ research staff, holds a toy baby covered in various Biostamps in one of their many labs on Friday, July 10, 2015.

A unique innovation from University research could change the way doctors perform and treat their patients. The Biostamp, created by John Rogers, professor in Engineering, and other scientists from various universities, allows doctors to monitor their patients’ health even when they’re out of the hospital.

Rogers’ creation is similar to a temporary tattoo in the sense that it’s placed on the outside of a patient’s skin and left in that position for a couple weeks. But it also does much more.

“The idea is to go from devices like Apple Watch and FitBit and Leapfrog into something that is really medically relevant,” Rogers said.

While the Biostamp rests on a person’s body, doctors can monitor blood pressure, blood oxygen, pulse rate, respiration rate and much more. Rogers said these sensors are so skin-like that people barely notice they are wearing them.

The Biostamp can also connect to the user’s smartphone to show the data it records, making it convenient for everyday use. The user can just check his or her phone at any time to see what the sensor is recording.

Rogers said he and his team are most excited about its potential to produce advancements in hospitals and the treatment of patients.  Because these sensors make it possible for doctors to monitor their patients’ health while they’re outside of their office, they can keep a log of what was happening at any certain time so a patient can go back and look at what’s happening if they have problems for a short time.

“It’s a set of technologies where we combine the hard materials that are needed to support the electronics and the sensor function, with really soft materials that define the overall mechanical characteristics of the integrated systems,” Rogers said.

Rogers and his team have been working with professionals in the medical field to get a better understanding of what they can do to help with their unmet needs. He said the collaboration between different people with different backgrounds in their respective fields has helped them understand how to best design and use the Biostamp.

“We think the only way to do that is to get away from the watch-band-type style of wearables into something that’s integrating intimately with the skin to provide much more clinically-relevant data streams,” Rogers said. “That is what the Biostamp is all about.”

Tony Banks, another scientist who has been working with Rogers, has interacted with many devices and sensors during the years of their partnership.

Banks wore some of the sensors on his fingernails to test their capabilities. He demonstrated how a simple tap of the fingernail on a smartphone sent data to his screen. He described it as near field communication, or NFC, which is a process that allows multiple technologies to communicate with each other using a radio communications system.

“Basically, your NFC in your phone is putting out a certain amount of power to be able to wirelessly power NFC devices, so this is the energy harvesting feature,” Banks said.

“We’re actually harvesting some of that energy that your cellphone is just putting out all of the time. You have this kind of mini power plant in your pocket that is wasting energy, so we’re taking that energy and using it for useful things.”