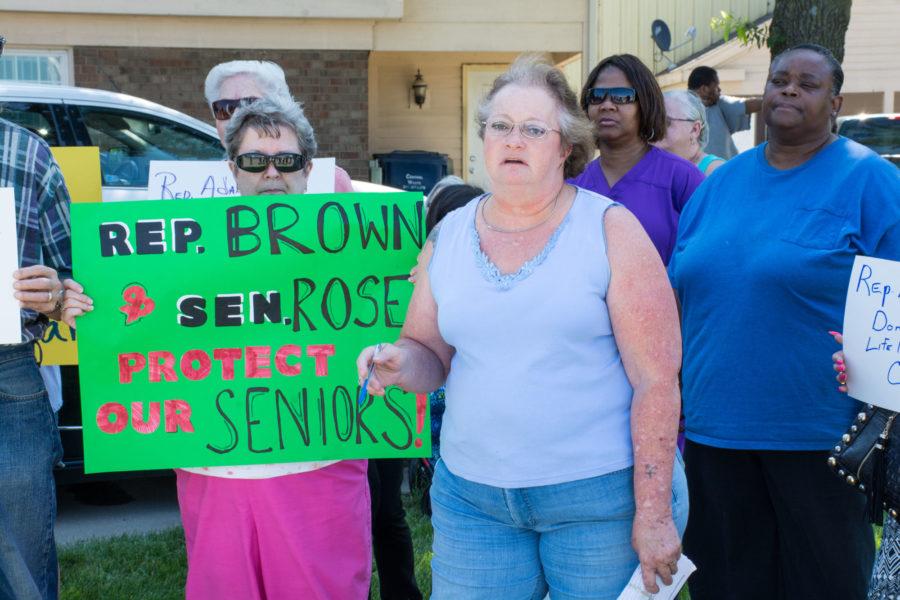 Local seniors along with Champaign County Health Care Consumers and the Illinois Alliance for Retired Americans rally in front of Rep. Adam Brown’s and Sen. Chapin Rose’s district offices in Champaign on Tuesday, July 14, to raise awareness about the effects of the proposed budget cuts to heating and cooling assistance and home care services.

Twenty-five community seniors rallied in front of Rep. Adam Brown’s and Sen. Chapin Rose’s district offices in Champaign, shouting, “Stop the cuts and save our seniors,” on Tuesday morning to state their opposition to Gov. Rauner’s proposed budget cuts.

Area seniors with the Champaign County Health Care Consumers and Illinois Alliance for Retired Americans gathered to rally against Rauner’s proposed budget cuts that would affect services that help thousands of Illinois seniors.

Two of the programs that Rauner has proposed to cut funding on are the Low Income Energy Assistance Program (LIHEAP) and the Percentage of Income Payment Plan (PIPP). Jen Tayabji, community organizer for CCHC, said Rauner chose to not fill spring funding for LIHEAP when its federal funding ended, and as of July 1, funding has been frozen for the Percentage of Income Payment Plan, leaving many low-income seniors without heating and cooling assistance.

“LIHEAP and PIPP help people pay their power bills for the summer,” Tayabji said. “And I personally don’t want my family to have to choose between paying their power bills, getting medications, or food. And people should really be able to afford their bills, and this funding’s really important for them to do that.”

Tayabji said Rauner is also calling for a substantial reduction in funding to the Community Care Program, which allows thousands of Illinois’ seniors to receive care in their homes and avoid costly nursing home care.

Barbara Franklin, president of the Illinois Alliance for Retired Americans, was the primary speaker at the meet-up and discussed why they want the proposed cuts to be restored.

Gail Hamilton, community health provider, discussed why the services were important for seniors. Hamilton said that, as a caregiver for the community, she knows many caregivers would not want to see their seniors go without care.

“For caregivers, it is unconscionable that Governor Rauner is willing to take the lives of seniors and disabled in his hands just to save money,” Hamilton said. “I would rather work for free for my consumer than to see them hurt, and there are ways to save money that don’t include hurting our citizens.”