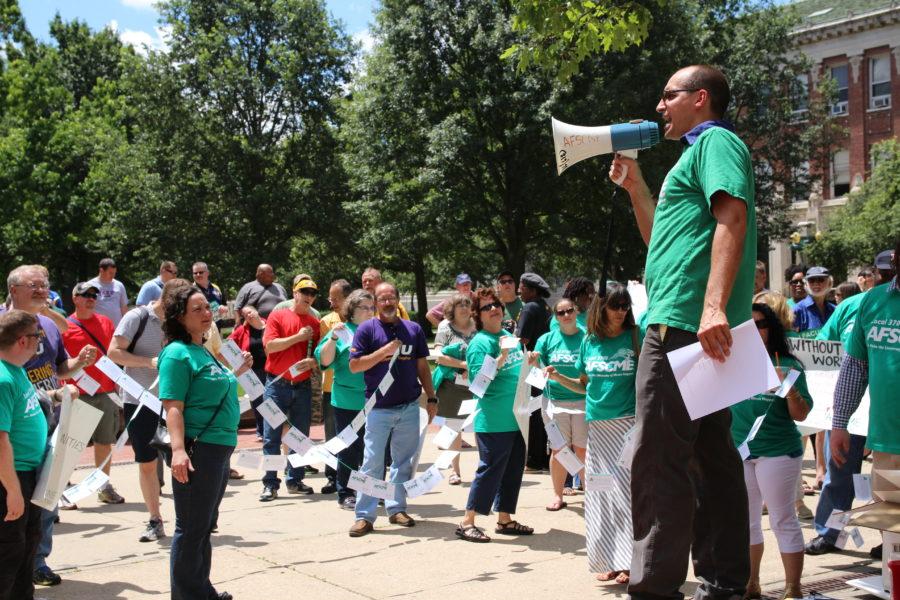 Dave Beck, staff representative for AFSCME Council 31, chants to union members to prepare to walk over to President Killeen’s office. Collectively, the union members are holding over 650 postcards, asking for fair contracts and respect from the University.

Last Tuesday at noon, around 100 union and community members rallied on the south side of the Illini Union to deliver postcards to President Timothy Killeen asking for a fair contract from the University.

Dave Beck, staff representative for AFSCME Council 31, led the rally of people who were holding postcards on strings and walking to Killeen’s office. He chanted, “What do we want?” with participants responding, “Fair contract!” Beck chanted back, “When do we want it?” and participants yelled back, “Now!”

“Union members perform a host of essential functions at the University,” Beck said.

Laura Drake, senior organizer with AFSCME Council 31, added, “Because of them, students get their books, professors get reimbursements — the whole university is dependent on them, and yet they’re being really disrespectful. These cards are about becoming a priority and saying that we deserve to have a fair pay increase and to be respected by the bargaining table.”

Drake said AFSCME Locals 3700 and 698 have been working on contract negotiations for over a year, “and the administration is sticking firm to no wage increases even though we’ve done research and we know there’s money there.”

Drake said in the last couple of years the University has given $400,000 in bonuses to the “top people, who are making a lot of money.” She said the money should be given to the people of AFSCME Locals 3700 and 698 because they help keep the University running.

“Almost 1,800 people serve as clerical and technical employees on this campus,” Beck said. “And we are taking a message to President Killeen that says enough is enough; respect our members, give us a contract that has fair wages and provides dignity to our members.”

Becky Burner, AFSCME Local 698 treasurer and senior library specialist, said the main goal of the postcards was to obtain a fair contract and to gain respect from the University.

“This is my first year being on the negotiations team, and I’ve always been raised to be a kind person and nice to everyone. And the way that they talk to us in negotiations is very demeaning—it’s bullying and very unfair,” Burner said. “But basically we’re trying to fight for a fair contract. That’s what today is all about.”

Each postcard had the statement: “As employees of the University of Illinois, we give 100% to
our jobs every day. We are devoted to the mission of the University – providing
aid to the students, faculty, staff, and community. In doing so, we play a
critical role in making this university the great institution that it is. We
urge your Administration to respect us at the negotiating table. We deserve
wages that compensate fairly for our experience and afford us the opportunity
to live a dignified life.”

Editor’s note: A previous version of this story stated the University has given $40,000 in bonuses to “top” employees, instead of $400,000. The Daily Illini regrets the error.