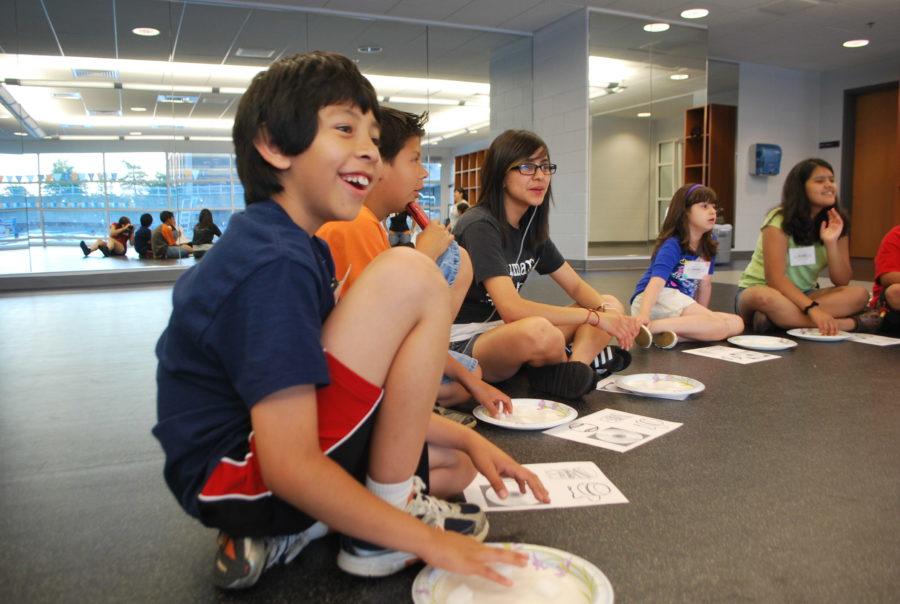 Abriendo Caminos offers nutrition classes for children and their parents.

Abriendo Caminos: Clearing the Path to Hispanic Health is a USDA-funded, six-week, community-based workshop where Hispanic-heritage families engage in physical activities and learn about nutrition and dietary health.

The program was developed by faculty researchers from the

Wiley said the development of the program began after learning about the rising health risks within the Hispanic community.

“There is a tendency among Latinos to develop metabolic syndrome and obesity, and it’s beginning earlier and earlier in childhood,” Wiley said. “And so the Robert Wood Foundation-Salud America Initiative really aimed in saying, ‘Look, we have this genetic predisposition, and we have very unhealthy eating habits in our Spanish community, and we need to address that.’”

Teran-Garcia said focusing on the smallest changes are extremely vital.

“What we’re doing here is baby steps – ‘mas o menos’ – a little more or a little bit less of this,” Teran-Garcia said. “Little steps of changing and decreasing the amount of sugar sweet beverages; little steps of increasing the amount of water they’re drinking; little steps like increasing one extra fruit and one extra veggie a day in their meals. That would be very important because if you do small changes, but they are permanent changes; they’ll have a longer lasting impact in those families.”

Liliana Samos participated in Abriendo Caminos along with her family in 2010. She said when she first moved to the area, it was a struggle to make decisions at the grocery store because of the overwhelming variety of options.

“I didn’t know how to find some of the fresh veggies that I was used to – eggplant, asparagus – and we were used to having fresh fish, and we were not used to eating frozen fish. It was very hard to get used to getting fish that was frozen,” she said.

“For us, it was interesting to learn how to take control of our portions and the servings at home,” Samos said.

“My husband started to lose weight, and he learned how to lose weight. Small steps are important,” Samos said. “Our kids became more physically active, and they had opportunities to learn about soccer clubs, and they started to become less shy and more integrated to the community, which is good for them.”

The six-week workshop invites attendees to participate in organizing the schedule of the program each week. The workshop lasts for about two hours per session — sometimes separating kids to attend the class taught in English and parents the classes taught in Spanish. Each structured segment consists of 30 minutes of learning about nutrition, 30 minutes of learning about shared family meals and about an hour of participating in physical activity as a family.

Teran-Garcia said a portion of the workshop carefully analyzes information such as nutritional facts, so that the families can be more confident the next time they go grocery shopping.

“When you get in a new country and a new place and a new store, you get overwhelmed with the varieties you have, and trying to make choices is very difficult,” she said. “We’re trying to teach them to look into the package and see that at least they have some fiber and multigrain. Nowadays, we can teach them about trans-fat. … We don’t try to make it complicated, just as simple as possible.”

“A huge focus of Abriendo Caminos is to build on traditions — existing traditions from the cultures of origins of these families,” Wiley said. “And so we’re working on recipes they may have some familiarity with, but we’re providing sort of healthier versions.”

Wiley said they hope families in Hispanic communities implement the baby steps they take away from Abriendo Caminos into their everyday lifestyle so that eventually, those steps can become permanent.

“Our end goal is to see Hispanic families in