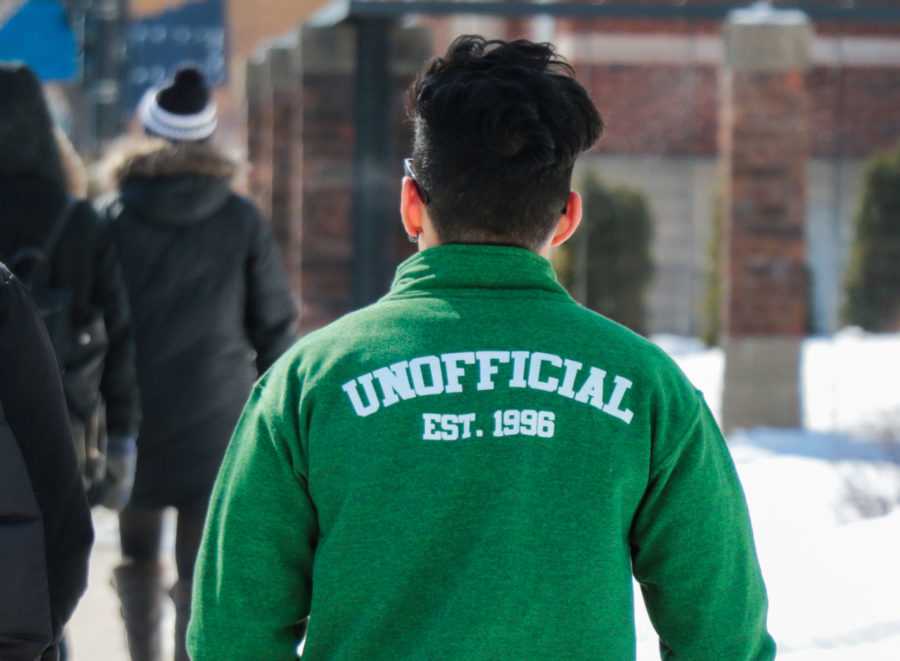 An Unofficial partcipant walks down on Fourth Street on Friday, Mar. 6, 2015.

On Aug. 3, the Princeton Review published its annual list of the 380 top colleges in the United States, based on data from students surveyed in the last year. The University of Illinois at Urbana-Champaign ranked number one in the list of Top Party Schools.

David Soto is the senior editor of the Princeton Review’s 380 Best Colleges, the book sold each fall containing detailed profiles of each college and 62 lists of topics such as “Great Financial Aid” or “Best Career Services.” He said that although the Princeton Review’s press release lists the average number of students surveyed per college at only 358, at large universities such as Illinois, it is not uncommon for thousands of students to complete the survey.

Additionally, Soto said every campus on the list is visited at least every three years by Princeton Review employees to conduct official surveys to keep information accurate and up to date.

Students are also able to complete the survey online at any point in the school year, although each student is only allowed to submit the survey once per year.

To determine the list of the top party schools, analysts looked at data on students’ opinions of the amount of beer, alcohol and drugs on campus, the importance of the Greek system to the school and the estimated time students spent studying.

Soto said that the ranking of Number One Party School does not insinuate that the University is not academically strong, too.

“(The book) is such a small subset of the colleges in the United States,” Soto said. “You have to be academically rigorous to even be on the list.”

According to the National Center for Education Statistics’ most recent count in 2011-2012, there are 2,968 four-year colleges in the United States, making the Princeton Review’s list contain only the top 15 percent of colleges.

On this year’s full profile of the University, students praised the great career services, library system and advisors for how they help students outside of the classroom.

The University is also ranked on the Princeton Review’s list of best career services in the nation. Gail Rooney, Director of the Career Center on campus, said that regardless of the Princeton Review’s ranking, the University’s career services are recognized around the country. The Career Center offers workshops on creating resumes, practice in interview situations and I-Link, the job board accessible to University students.

“If this number of employers want to come to Illinois, they must be finding good candidates,” Rooney said.

To the questions about professors, students responded that they were “not just good at research, but also instructing and mentoring.” The data showed that some class sizes were very large, but students said that the professors knew how to teach to a large lecture hall and were very approachable outside of class time.

“There is a robust social life at Illinois,” he said. “Incoming students who do want that social life can get it at a place where the academics are equally represented.”

Soto said the Princeton Review estimates that around 50 percent of all college-bound students use at least one aspect of the company’s services, which include test-prep help, guide books and the list of the 380 top colleges.

Daniel Amram, junior in Business, said that when he was looking at colleges, the strength of the business school and the affordability of in-state tuition were major factors that influenced his decision to come to Illinois, but he also wanted a campus community where he knew he could feel at home within organizations, even on a very large campus.

Amram said that if he were looking at colleges now, the Princeton Review ranking would not negatively influence his perception of the school.

“If anything, the ranking would have further encouraged me to attend Illinois because many academically motivated students, like myself, also search for colleges emphasizing social aspects, knowing that we can do well balancing both,” he wrote in an email.

Amram described the social life at Illinois as “diverse and abundant” because of the many RSOs on campus, based on shared interests ranging from rock climbing to Dance Dance Revolution, and the variety of students that attend the University.

Amram is the social chair for Phi Gamma Nu, a business fraternity on campus, and is responsible for planning numerous social events for the other students in his organization.

“Social life at Illinois isn’t just about drinking and parties, there’s a large social presence in the sober realm,” Amram wrote. He listed paintballing, bowling, ice-skating and miniature golf as activities that his organization can enjoy, either on campus or in the Champaign-Urbana area.

The Princeton Review doesn’t release the exact scores of schools within the Top Twenty lists, but Soto said that the universities on the list are generally close to each other’s scores. There is usually a significant drop off after the list ends. Illinois ranked as number five on the list in 2014, a drop from its number three spot in 2013.

Soto also stressed that the “Top Party School” ranking is only one of the rankings the university received, and it should be viewed with some of the other lists the University placed on, including outstanding career services, high diversity and a sustainable campus.