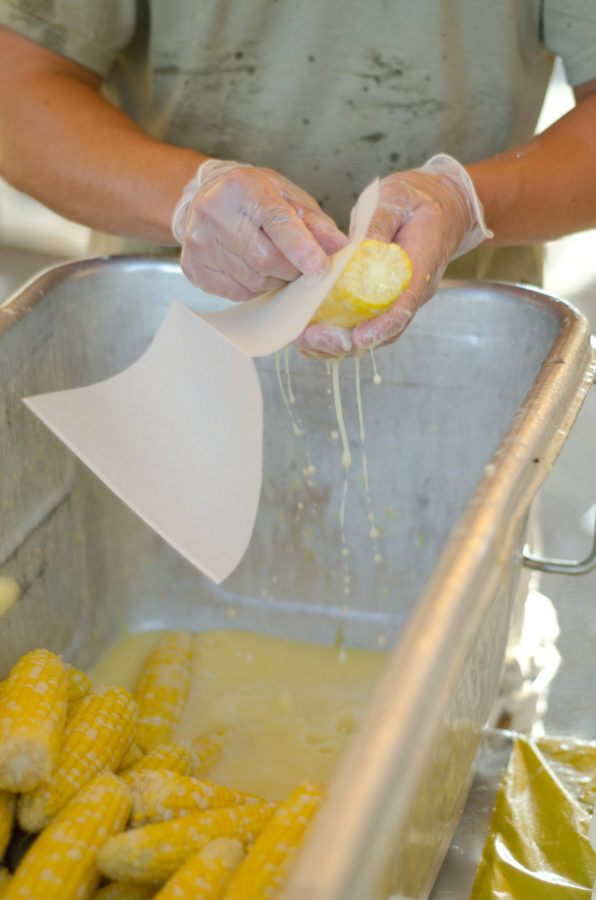 Chong Jiang The Daily Illini A volunteer butters and wraps up freshly cooked corn on the cob at the Urbana Sweetcorn Festival on Saturday, Aug 27, 2011.

The Urbana Sweetcorn Festival, Champaign County’s largest free festival, averages around 50,000 attendees a year, but the sponsors are hoping for more at this year’s 40th anniversary.

Jessica Snyder, interim executive director of the Urbana Business Association, said the association has been coordinating the festival since 2004, before which Busey Bank hosted it as an event to show appreciation for their customers.

Snyder said what makes the Urbana festival different from others is that it appeals to a large range of people. The festival, happening Aug. 28 and 29, will include live music, a variety of food and drink, a vintage car show and vendors to learn and shop from.

“We really have something for everyone, and that broad appeal is what has established the Sweetcorn Festival as one of the biggest and best festivals in East Central Illinois,” Snyder said.

Urbana City Council Alderman Charlie Smyth, Ward 1, said he has seen the festival change throughout the years. He remembers in 1990, there was a dunk tank, where “celebrities” were posted in for people to dunk in the water.

Today, he said, people don’t see adult-oriented games as much as the past; the activities are more geared toward children. He also added that people see more ethnic and culturally different foods today than in the past.

Smyth said he feels the festival is a good opportunity to show students at the University there is more to the area than just a college campus, and it allows them to get to know Urbana.

Alderman Dennis Roberts, Ward 5, said he has attended the event for eight years.

Although there are a couple neighboring cities with festivals based on corn harvesting, he said Urbana’s is unique.

Snyder said the festival continues to grow each year.

“What started out as a simple celebration of sweetcorn has grown into a huge community event that attracts tens of thousands of people to our lively downtown area,” Snyder said. “Really our core mission is the same — to celebrate sweet corn, the end of summer and to do our best to give back to the community — we’ve just added more activities and components to the festival to do so.”