Committee for new University chancellor to be assembled 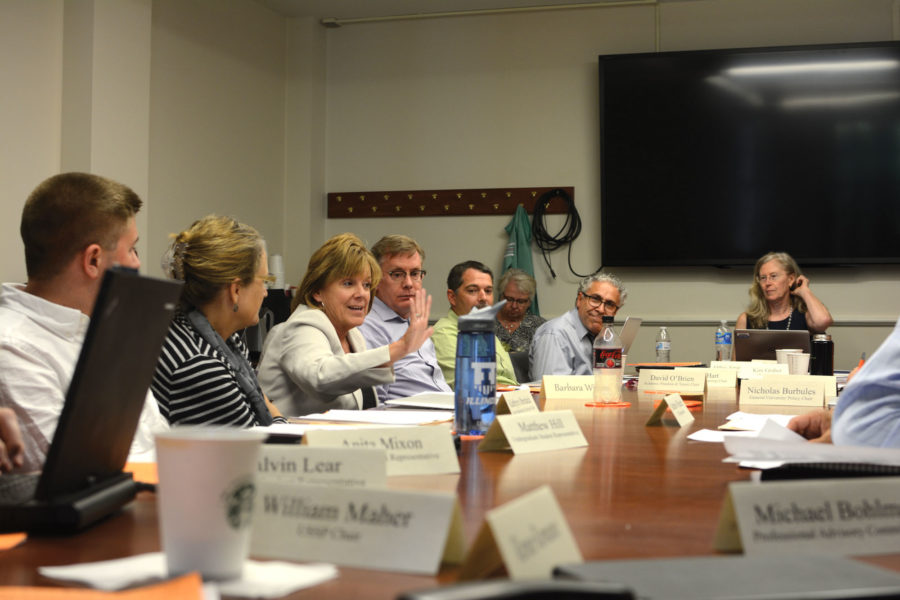 A search committee for a permanent chancellor will be assembled by the end of September at the earliest, the Senate Executive Committee discussed at a meeting Monday.

Kim Graber, SEC vice-chair, said there are strict rules that must be followed on how the committee is established. The committee, which must be assembled by the Academic Senate, must be chaired by a faculty member and comprised of eight faculty members, three students, one dean, one academic professional and one staff member.

To determine the nominations, the senate’s Committee on Committees will send a University massmail, then compile a diverse slate of candidates — being sure to take race and gender into account.

However, this process cannot begin until President Timothy Killeen’s office initiates it in a letter; the process must then be approved by the senate before it can begin the search.

“I have been in contact with the president’s office, and they are putting together a letter requesting the beginning of this process,” Graber said.

She said the SEC will be invested in the whole process; Gay Miller, SEC chair, said elections to the chancellor search committee are competitive.

“Perhaps we might consider calling a special meeting of the senate, so we can approve this particular item say — two weeks from now, rather than the middle of September,” said Calvin Lear, a graduate student representative to the SEC. “The idea is we don’t have to stick to our once a month schedule; we can call extra meetings if necessary.”

Bill Maher, SEC member, said he felt it would be impossible to call a meeting in two weeks when the SEC hasn’t agreed on the process of establishing a search committee.

“If we’re using the text as it stands today, then we have the text,” he said. “However, if we want to add any elements or change anything, then we’re not in a place to vote on it.”

“This is what electronic voting is meant for – it allows us to move quicker,” Burbules said. “Let’s get this to the senate and vote on it; we don’t need to wait until the middle of October to do this — it’s too late in the cycle.”

Lear suggested having the Committee on Committees start developing a list of candidates to serve on the chancellor search committee, ahead of President Timothy Killeen initiating the process. However, Matthew Wheeler, SEC member, was concerned this would be perceived as undermining Killeen’s authority.

“Decorum dictates that we follow this process,” Wheeler said.