For international students, Chatime is a taste of home 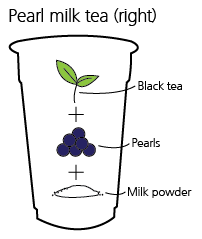 A purple-shaded map covers the wall opposite the crowded counter at Chatime, a tea café on 512 E. Green St., Suite C. A line has been winding out of the café ever since its grand opening Saturday.

The map shows 11 spidery lines extending from Taiwan, the franchise’s country of origin. Around the map, names of cities around the world show where Chatime has expanded. The wall serves as both a centerpiece for the café and a representation of the company’s motto: “Global Brand with Local Flavor.”

The chain has over 1,000 locations worldwide. Since its opening in 2005, Chatime has become popular in East and Southeast Asia, according to Daniel Tan, junior in Engineering, who frequents Chatime locations in his home country as well.

“Everyone knows this brand,” he said.

Champaign is the only Chatime location in Illinois, and with 6,663 students enrolled from East and Southeast Asia in spring 2015, the product appeals to a large audience. Kamal Suria Asri Raja, junior in LAS, said his banana milk tea had the same taste and quality as the teas he gets from the Chatime in Malaysia, his home country.

“The way they made it makes it special,” he said. “They’re unique because the tea is roasted.”

According to Chatime’s website, they ensure product quality and consistency by using a “High Tech Tea Making” procedure to adjust to the different international environmental conditions, such as humidity, temperature and barometric pressure.

While certain staple products stay the same, local tastes are considered while constructing the menu.

“Compared to China, it’s very different,” said Eyi Zhang, junior in Engineering. “It doesn’t have much of a tea flavor.”

Zhang said she had tea two days in a row, and it tasted different both times, but she attributed the inconsistency to the café still being in its early days.

“I think they adjusted it, like Chinese-American food,” said Justin Sass, junior in Engineering, regarding the increased sweetness of the drink. He said in China, a strong tea flavor is preferred to sweetness.

“They have a really great selection,” Zhang said, pointing out a section of the menu that allows customers to choose sweeteners, milk and drink additions. “That’s a straight-up Chinese, Taiwan thing.”

On the wall next to the counter customers can see the full menu, which includes milk teas, jelly teas, a coffee line and smoothies.

For their grand opening, Chatime offered a “buy one, get one free” special on Pearl Milk Tea and Grass Jelly Tea. All beverages can also be upgraded to a large at no extra cost until Aug. 30.

Zhang mentioned that once the promotion ends and new customers have satisfied their curiosity about the new café, the crowds should go down.

Raja and Tan, who were playing cards in the café, said Chatime serves as a social hub in Malaysia.

According to Tan, whenever someone wants to hang out, they say, “Let’s go to Chatime.”