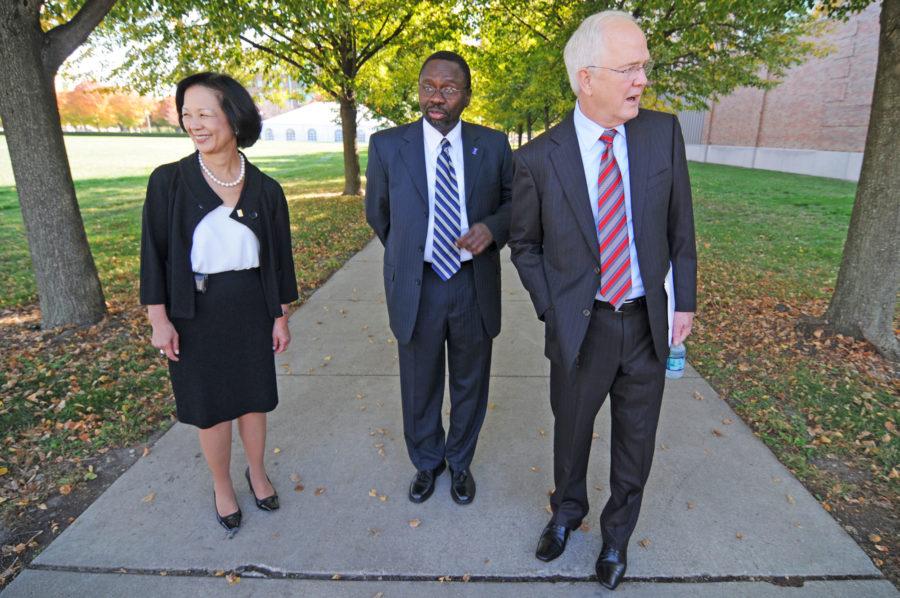 From left to right, Phyllis Wise, UI Chancellor, Ilesanmi Adesida, Dean of the College of Engineering, and Michael Hogan, UI President, wait for governor Pat Quinn’s car to arrive before the ground breaking for the new Electrical and Computer Engineering building on Friday, Oct. 7, 2011.

Adesida will return to faculty in the College of Engineering effective Aug. 31. His resignation comes after a month of controversy surrounding the use of personal emails and the resignation of Former Chancellor Phyllis Wise.

Acting Chancellor Barbara Wilson announced his resignation in a massmail to University faculty and staff. Wilson said she will be consulting with the Council of Deans, members of the Senate Executive Committee and campus leaders to help find a candidate to serve as interim provost.

“My association with the University, and particularly its outstanding faculty and students, has been a source of deep pride and fulfillment for me,” Adesida wrote in a letter to Wilson, according to a news release. “I recognize that current controversies are causing distraction to the administration and the student body, and I do not want to contribute to those distractions.”

Adesida, who publicly and enthusiastically endorsed the Carle-Illinois College of Medicine, was included in the more than 1,100 pages of emails released by the University that were previously withheld to skirt FOIA requests. He, along with other administrators and University members, actively worked to implement the new biomedical engineering school, despite opposition from top University officials, including former Board of Trustees Chairman Chris Kennedy.

Senate Executive Committee member Nick Burbules, professor in general educational policy, said he wished Adesida had a chance to pursue his future for the campus further.

“As I said about former Chancellor Wise, he deserved a better fate than this,” he said.

While reflecting on Adesida’s resignation, former Senate Executive Committee Chair Roy Campbell said he is unsure of why Adesida resigned, but he knows Adesida was concerned about Wise’s “predicament and what happened to her.”

“Whether or not (his resignation) precedes other changes, that would be a good question because new chancellors, new provosts, they want to bring in their own people,” Campbell said. “It is obviously probably a very anxious time for people in the administration.”

During the Senate Executive Committee meeting Monday, Senator Abbas Aminmansour said he was disappointed by Adesida’s resignation and “didn’t want it to come to this.”

Wilson said she could not say more than what Adesida said in his letter.

“He loves this campus and he doesn’t want the challenges to be a distraction, he wants to make sure we can move forward and he felt that this was the right thing to do,” Wilson said.

Wise appointed Adesida as provost in 2012.

Wilson said she did not yet have plans for finding Adesida’s permanent or interim replacement. She added that there is not much time to find an interim provost, given Adesida’s last day is just one week away.

“Ade has left a permanent and positive mark on this university,” Wilson wrote. “He has my respect and my gratitude. Replacing him will be no easy task.”

Correction: A previous version of this article incorrectly attributed a quote to Senate Executive Committee Chair Gay Miller. The quote should have been attributed to Acting Chancellor Barbara Wilson. The Daily Illini regrets this error.