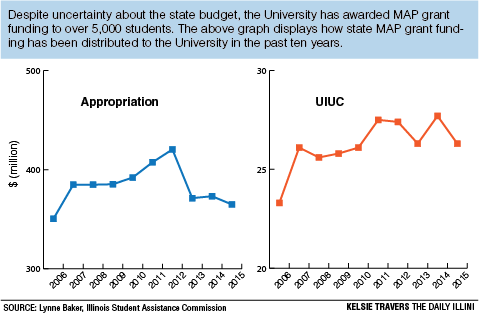 Over $12 million in the State of Illinois Monetary Award Program grants has been distributed to 5,667 University students for the fall semester, despite the lack of a planned state budget, said Director of Student Financial Aid Dan Mann.

As Illinois continues to go without an approved state budget, concerns have been raised about students receiving MAP grants. The grants give aid to Illinois residents who attend Illinois colleges and show financial need, among meeting other requirements. The money does not need to be repaid, according to the Illinois Student Assistance Commission’s website.

On Aug. 19, the Illinois Senate approved a bill authorizing the state to pay $373 million to the Illinois Student Assistance Commission for grants in the Monetary Award Program to eligible students.

Lynne Baker, managing director of communications for the ISAC, said there are colleges that will be crediting students for MAP grants, but some will not be able to aid students.

Many students who do receive the grant usually eventually resort to financial aid to attend college. Additionally, those who receive aid have to overcome other obstacles, such as being first generation college students, before they can receive financial aid, Baker said.

According to Baker, students in need who do not receive aid may have to drop classes or withdraw from an entire semester.

“At some point, the University may need to re-visit the decision to credit MAP Grants to students’ accounts, but (the University) plans to continue doing business as usual for now,” Mann said.

State Rep. Kelly Burke, D-36, said most students who receive MAP grants may not have many resources or come from families where there is no money to pay for college. She said the recipients are generally people who couldn’t attend school without the grants, or college would take them much longer to finish without the aid.

Burke said Illinois’ MAP program is helpful because students in Illinois may use funds for public and private colleges, which is not common in other states with similar programs.

The bill to authorize MAP grant funding for the 2015-2016 school year is currently in the Illinois House of Representatives.

Richard Goldberg, deputy chief of staff for legislative affairs, said in a written testimony that although Gov. Bruce Rauner showed his commitment to maintaining funding for MAP in his introduced budget, the bill “would simply pave the way for more debt or higher taxes — and Gov. Rauner would veto it.”

Mann said the Office of Student Financial Aid is projecting that 6,465 University students will receive a grant for the 2015-2016 school year. As of Sunday, $12,253,850.93 in MAP grant funds has been distributed to 5,667 students; the next disbursement run will be Wednesday.

“We are still hopeful the MAP program will be funded,” Mann said. “In the event that the program is not funded, the Office of Student Financial Aid will communicate with impacted students and let them know what financial aid options might be available.”