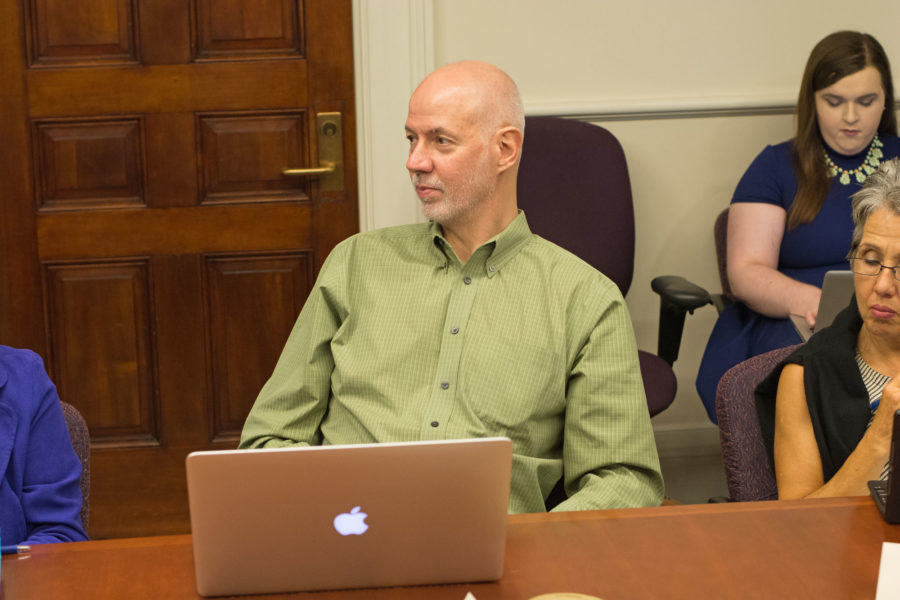 The Senate Executive Committee made good on their promise to call special meetings for the chancellor search process if necessary, and held an extra meeting Monday to begin the hunt.

“We called this meeting to make sure we have a document we’re all comfortable with,” said Gay Miller, SEC chair. “Now we have a request from the President’s office to initiate the chancellor search process.”

On Friday, the senate’s Committee on Committees reviewed the Academic Senate’s chancellor search committee document, which they brought to the SEC at Monday’s meeting.

Originally, five of the seven faculty members on the committee, excluding the committee chair, were to be selected by the senate as a whole. The SEC was supposed to select the remaining two.

“We probably shouldn’t include the SEC electing two people because that will be highly controversial,” said Bill Maher, SEC member.

Nancy O’Brien, an academic senator representing the committee on committees, said the SEC is supposed to select two faculty members to serve on the committee to ensure diversity.

“The SEC might be able to provide balance,” O’Brien said. “For example, if everyone elected (to the committee) was from LAS, the SEC might say, ‘We need representation from FAA, or Engineering, or Business.’”

O’Brien also said the SEC would choose the final two committee members from the remaining candidates who were not elected to the committee by the academic senate. Therefore, the SEC couldn’t nominate any new candidates to serve on the committee.

“I think it’s best that we leave it up to the senate,” said Abbas Aminmansour, SEC member. “I don’t think it’s appropriate for us to try to ensure diversity because I don’t think we can. Do we use gender? Religion? Other criteria? There’s no way we can meet all of that. Ask the committee on committees to limit the number of faculty from each college, and let the (academic) senate do the rest.”

Nick Burbules, SEC member and general educational policy professor, said counting senate ballots in the past has proven to him that the SEC needs to select two faculty committee members to ensure diversity.

“I know we’re in an anti-SEC mood, but there’s no way in the voting system you can guarantee you’re going to get a balance,” Burbules said. “This is a legitimate function of the SEC.”

Bettina Francis, SEC member, said although she agrees with the intention of enabling the SEC to select two members, she felt too many people would see it as unfair.

Ultimately, the SEC, decided to allow the senate to elect all faculty members to serve on the chancellor search committee, but no more than two delegates from each college can be elected. It also recommended electronic voting to help expedite the process.

“You can’t tell people, unfortunately, how not to vote,” Burbules said. “There’s a danger that you don’t get a very representative outcome.”

The SEC decided not to retain its power to nominate two of the four faculty members to serve as the chair of the chancellor search committee. Instead, the committee on committees will nominate the remaining two faculty members and the academic senate will select the top two nominees from the group. Finally, President Timotthy Killeen will select one of the two nominees to serve as the chair of the committee.

The SEC also voted against allowing a representative of the University of Illinois Foundation or the Alumni Association to serve on the chancellor search committee.

“There were representatives from those two bodies on the presidential search committee,” Burbules said. “Is a chancellor search different?”

The senate’s bylaws specifically instruct the senate to have full jurisdiction over the chancellor search process without the influence of other constituencies, Maher said.

He said there are other ways for members of the Illinois Foundation and Alumni Association to contribute.

Katherine Oberdeck, SEC member, asked if it’s necessary to employ a search firm to help with the process.

“We go through this whole process and then there’s this other entity we can’t control,” Oberdeck said.

Burbules said search firms provide a valuable service as long as the search committee keeps them properly in line.

“In the end, it’s just a matter of the committee and president communicating to the firm, ‘You work for us, you follow what we tell you,’” Burbules said. “I’ve seen really good search committee chairs who have drawn really good lines, and I’ve seen mission creep.”

The SEC decided to keep the search firm as a possibility in the chancellor search committee document and recommended the passage of the revised document.

Aminmansour suggested the committee on committees begin looking for willing candidates for the chancellor search committee before the academic senate approves the document, simply to save time.

“All they are doing is collecting names, they’re not committing anyone to anything,” Burbules said. “I like that idea.”

Miller said she recognizes the need to move quickly.

“The President said in his letter he hopes the position will be filled by the middle of the spring semester,” she said. “So sometime around March.”

Correction: A previous version of this article stated the chancellor search committee document “calls for a committee chaired by a faculty member and consisting of eight faculty members, three students, one dean, one graduate student, and one academic professional.” The Daily Illini regrets this error.