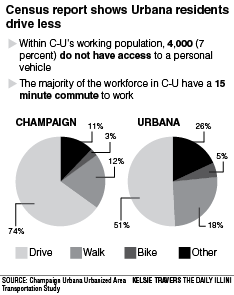 The cars that race down Green Street every day may imply otherwise, but a report from the U.S. Census reported residents in the Champaign-Urbana area make up one of the lowest rates of private vehicle commuting in the country.

The report, “Who Drives to Work? Commuting by Automobile in the United States: 2013,” was published in August by the American Community Survey Reports division of the U.S. Census Bureau. The survey included 15 metro areas throughout the country.

In 2013, 78.4 percent of workers in Champaign-Urbana commuted to work by private vehicle. The second most popular mode way to get to work was walking, which was 7.9 percent of commuters choice of transportation.

Brian McKenzie, author of the report, said in the report the private automobile is the main form of transportation for work and other travel purposes in the United States. In 2013, about 86 percent of United States workers commuted to work by private vehicle, either driving alone or by carpooling. The rate of carpooling has declined since 1980, dropping from 19.7 percent to 9 percent, according to the report.

Morocoima-Black said people in Champaign-Urbana choose to commute to work by vehicle due to convenience.

“People value time, and they know that walking, biking or taking the bus will take longer time for them to get to work in the morning or back home in the evening,” Morocoima-Black said. “Another factor for not using transit is the lack of privacy or peace and quiet time, as well as the lack of direct access to destinations outside of campus and the downtowns.”

The report found that nationally, Champaign-Urbana has a higher rate of private vehicle commuters than the New York-Newark-Jersey City area, Boulder, Co. and Ithaca, NY, among other places.

Bill Brown, Cunningham Township Board member, said the report references Champaign and Urbana as one entity. According to the U.S. Census Bureau, Urbana has about 55 percent of residents using their car to commute to work, followed by walkers at 15 to 16 percent. Sixteen percent of residents use public transit and 6 percent bike.

“One thing to remember about the data is that the American Community Survey conducted by the census takes a small sample by mail every week throughout the year, so 6 percent by bike means an average for the whole year,” Brown said.  “It would probably be lower in the winter and higher in other months.”

“Champaign-Urbana is basically in the group with lower automobile use. That’s important,” Smyth said in an email. “Being a college community like several others on the list, walking is a big second choice. For those who live near campus, it makes great sense.”

Morocoima-Black attributed a steady rate of the use of alternate transportation methods to efforts that have been made in the last 10 years to make such methods more appealing to commuters.

“The staff at MPO and it’s members have been working for the last 10 years to make the Champaign-Urbana urbanized area more bike and pedestrian friendly,” Morocoima-Black said.  “(We are) providing new, more and better bicycle and pedestrian facilities, and conducting educational and enforcement campaigns to educate the people in the community about the benefits of biking and improving traffic safety.”