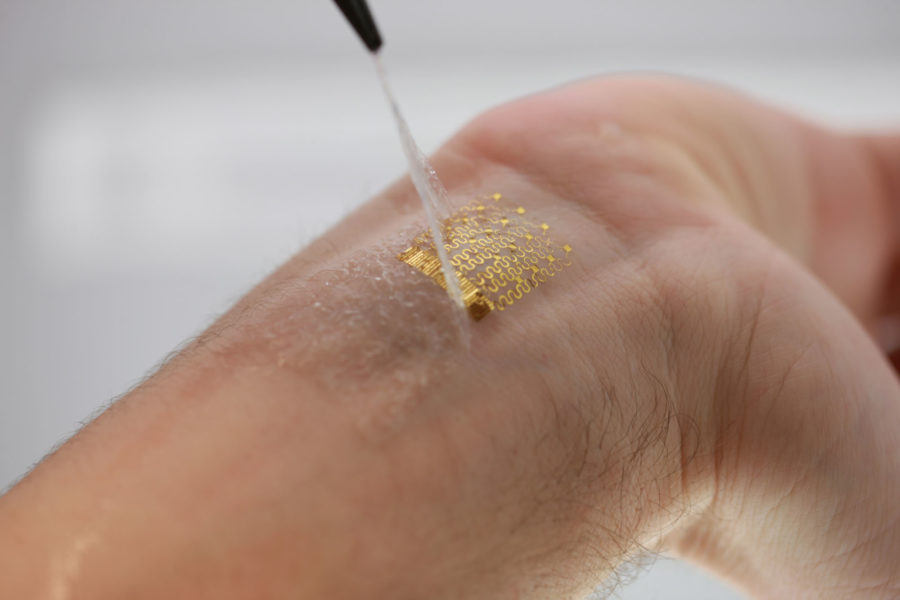 Photo Courtesy of Chad Webb The flexible technology acts similarly to a child’s temporary tattoo and adheres to the user’s skin. John Rogers, professor of materials science and engineering, said his team is interested in working with electronics beyond the capabilities of what current technology that devices use.

John Rogers, often touted as one of the University’s “star professors,” will leave the Urbana campus for Northwestern University in fall 2016.

Rogers began his work at the University in January 2003. Most recently, Rogers and his research team have developed a wireless antibiotic implant that dissolves after a patient’s treatment is complete. In 2013 the group developed a tattoo-like sensor that can measure brain waves, heart beats and the contraction of skeletal muscles.

Rogers received master’s degrees in physics and chemistry from MIT in 1992 and also went on to earn a doctorate degree in physical chemistry. After receiving his doctorate, Rogers was a member of the Harvard University Society of Fellows from 1995-1997.

Rogers will work at Northwestern as the Louis Simpson and Kimberly Querrey Professor of Materials Science and Engineering, Biomedical Engineering and Medicine in the Simpson Querrey Institute for BioNanotechnology, Northwestern’s newly endowed center for biointegrated electronics.

The center will be affiliated with their medical school and college of engineering. He will officially begin work at Northwestern in fall 2016, but he still plans to work closely with the University.

“Being able to stay in close geographic proximity to Urbana was really important to me because my whole career is based on this place, the University of Illinois, and it’s been extremely good to me over the years,” Rogers said. “It’s been the best research environment that I’ve experienced.”

Rogers said he has worked with numerous medical and engineering collaborative colleges around the nation during his time at the University but he is looking forward to having better access to similar facilities at Northwestern’s medical college for his research.

“I think all of the fundamentals are very strong for launching a medical school here (at Illinois), and I think all the pieces are in place to make that happen but it will take time,” Rogers said. “For me, I think we have devices that we want to push in the direction of clinical translation right now.”

Greg Girolami, Rogers’ colleague and chemistry department head, said he helped recruit Rogers to the University and has known him since. Girolami said Rogers will be “impossible” to replace.

“He is incredibly creative and has just brought a tremendous amount of new scholarship to our campus, and I’m glad to see that he will be continuing his collaborations here,” Girolami said.

While his colleagues argue that his shoes will be unfillable, Rogers said he believes his time at the University has given him more than he could hope to give back.

He said the research environment at the University is “in some ways, better than any I’ve experienced before,” noting he studied at MIT and worked at Harvard.

“The breadth and depth of the programs of research here at Illinois and the midwestern culture and orientation just really blends together to form a uniquely enabling environment for making progress,” Rogers said.