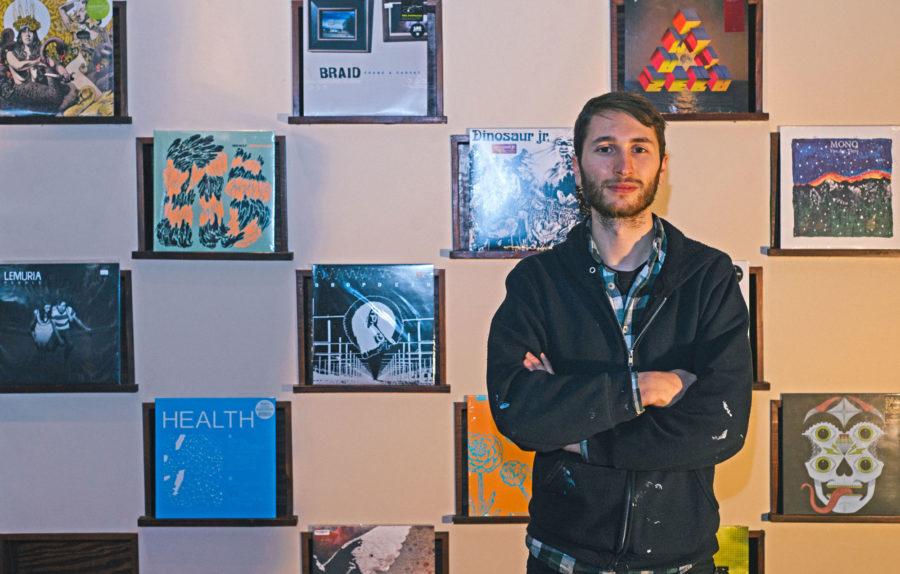 Portrait by Zach Dalzell The Daily Illini Nathan Landolt, 27, stands in front of a few of his records at Error Records, still under construction. Error Records will be an all ages music venue as well as a venue for other forms of art.

The immutable nature of analog music may not have the convenience of iTunes, Spotify or Pandora.

But Daniel Walbright, second-year law student, believes listening to albums on vinyl is the most authentic way to listen to music.

“It’s just the aesthetics of the whole thing that people are getting back to,” Walbright said. “Vinyl definitely has better quality.”

Walbright’s favorite vinyl location in the area is Error Records. Although the label opened during 2007, Error Records has been a physical store for two and a half years. It has provided a space for people to explore a wide variety of music, as well as a venue for bands and other artists to perform. However, the store will be closing on Sept. 30.

Walbright, having performed at Error Records on multiple occasions, said the venue allowed him to have a rewarding musical experience.

“Error was really the only venue that I could think of that allowed unique bands to play there,” he said. “You got to hear music that you wouldn’t have heard otherwise.”

Nathan Landolt, founder of Error Records, said even though the store had great success due to him working two other jobs and being on tour, as well as being mostly staffed by volunteers, he thought it was time to make a new transition with the store. However, he still values the impact Error had on the C-U community.

“Error Records always had an all-ages DIY music space and venue. I think that is what made it stand out from any store in town and across the US,” Landolt said. “I wanted a change, and I set out to do what I wanted to do, and it’s been longer than I thought it would last.”

Although Error Records is closing, the space will continue to provide the community with vinyl records and CDs, under the supervision of Jesse Grubbs. Next month, See You CD & Vinyl will take over as the town’s getaway for music lovers.

“It’s nice to just pass the torch, especially for the record store because it will stay open,” Landolt said. “(Jesse) is going to put the same amount of heart into it; I just hope for him to get some sort of fulfilment like I have.”

Grubbs said he has had a long history of collecting vinyl records, in addition to studying music journalism at Columbia College. He joined the Error Records staff this year and thought it was important to continue to provide a place where people can share their passion for vinyl records and CDs.

“It came a lot sooner than I thought it would, but it has been something that has been a goal of mine,” Grubbs said. “I didn’t want the space to turn into a lawyer’s office. I wanted to keep it as another independent records store and keep that scene going.”

Grubbs also thinks that a record store offers a space where others can feel safe in exploring their musical taste without the critique of others.

“Usually with an independent store it isn’t this grand thing,” he said. “These people feel safe coming to you and want to buy what they want to buy without feeling like they are being judged for it.”

Grubbs thinks that his sales will remain unaffected due to dedicated customers who seek records for them to collect.

“I think that the effect of the digital age has already hit, and I don’t see it getting any worse,” he said. “Yes, it is on a smaller scale and may not be the most profitable business, but it is something where I can offer something to a select group of people that still want to collect this art.”

By expanding the store’s collection and focusing his efforts on marketing, Grubbs hopes to bring more traffic into that part of Urbana, and ultimately allow it to grow.

“Besides offering a good product at a good price, I want to attract more people of all ages to this part of Urbana and help it grow in any way that I can.”

In addition, having bonded over vinyl records with his father, Grubbs hopes to offer the same kind of memorable experience to those who visit his record store.

“By offering CDs and vinyls, I can allow that same experience for somebody else to come.”

See You CD & Vinyl will have its first opening on Oct. 3. Grubbs said anyone looking for a place filled with hidden gems and a community passionate about music should consider making a trip to downtown Urbana.

“I think that it is more than the music. It is more about being able to come here and letting someone have something that they can remember and that they can connect with.”