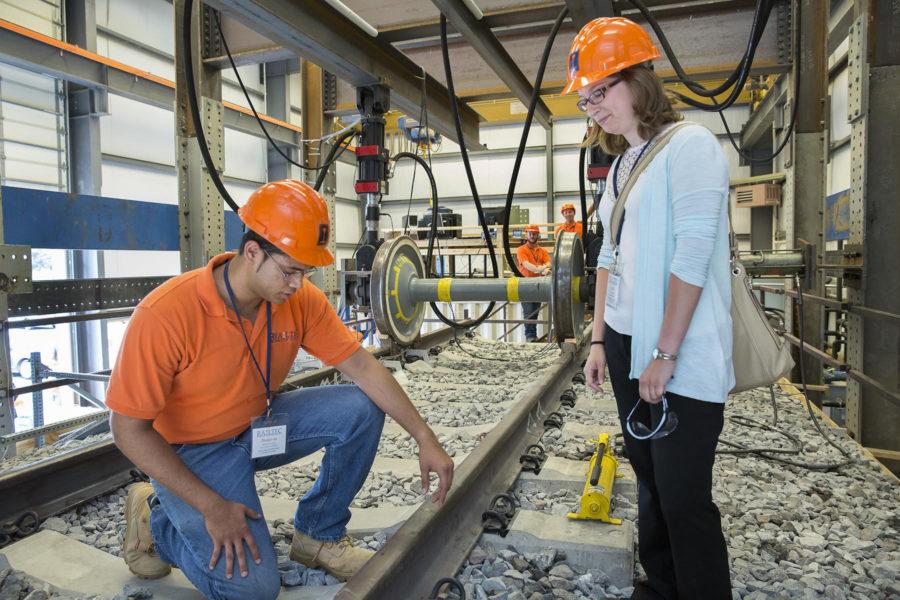 The Rail Transportation and Engineering Center at the University opened a new laboratory in August that is designed to assist in the improvement of rail transit infrastructure.

The new 3,500 square-foot lab, known as the Rail and Innovation Laboratory, or R.A.I.L., is a unique space that gives researchers a place where they can test different variables that affect rail lines in a controlled environment. According to John Riley Edwards, a senior lecturer and research scientist in the Civil and Environmental Engineering department, there is no other lab like this in the U.S.

R.A.I.L. is equipped with a full-depth track structure underneath it, which includes a layer of dirt, the sub-ballast and the ballast, which are made of crushed stone. This gives researchers a complete and fully functional model of a rail line that they can run tests on, such as applying stresses and strains to a wheel set.

Almost 20 undergraduate and graduate students currently work with the lab. Edwards said while R.A.I.L. is aimed more toward engineering students, there is no need for an engineering background to get involved. It is open to anyone who has a “passion to learn new traits” and wants to get hands-on experience working in the field.

Most of the students who work with R.A.I.L. and RailTEC are upperclassmen, because the classes offered are upper-level classes. However, Christopher Barkan, the executive director of RailTEC, said they always encourage undergraduates to get involved.

“We have had numerous undergraduate research assistants over the years, including a number that who started as early as their freshman year,” Barkan said.

One of RailTEC’s newest projects — in conjunction with R.A.I.L. — is the “Resilient Concrete Crosstie and Fastening System Designs for Light Rail, Heavy Rail, and Commuter Rail Transit Infrastructure.” The Federal Transit Administration is backing this $2.4 million venture along with partners such as the American Public Transportation Association, New York City Transit, Metra (Chicago) and Amtrak, among others.

The R.A.I.L. lab is located at the Harry Schnabel Jr. Lab on the U.S. Army Construction Engineering Research Laboratory campus. It had its official grand opening on Aug. 19.

“The primary focus of this project is to improve the design of all the rail transit infrastructure components in the U.S.,” Edwards said. “That’s primarily the crossties that are attached to the rail and the fastening systems used to attach the crossties to the rail.”