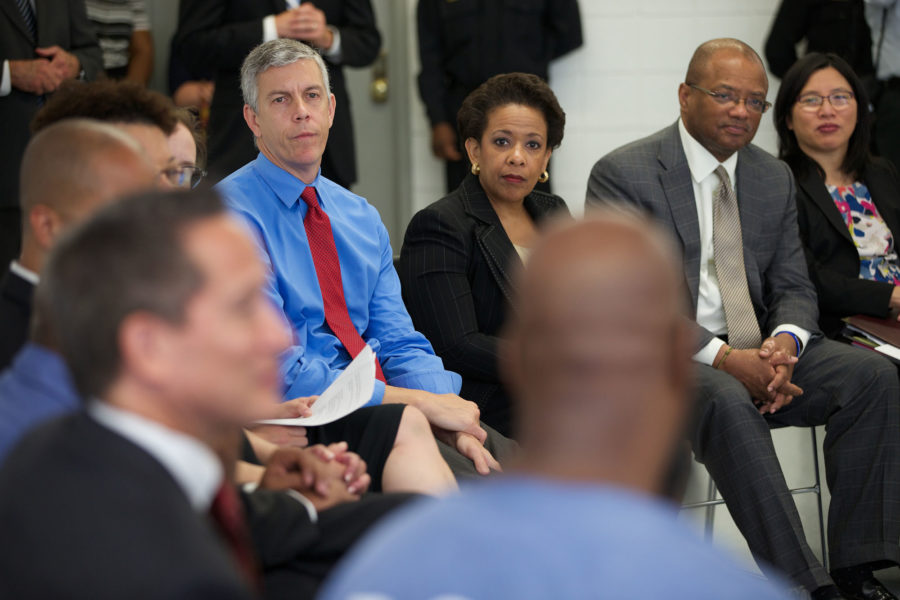 U.S. Secretary of Education Arne Duncan talks at a discussion. Duncan will visit the University campus the week of Sept. 14 for the Back-to-School Bus Tour. | Photo courtesy of U.S. Dept. of Education

U.S. Secretary of Education Arne Duncan is scheduled to discuss disability resources Wednesday morning during his visit to the University.

He will discuss the changes and challenges in education while “highlighting the champions of reform — teachers, parents, community members and others.”

The 2015 tour theme is “Ready for Success” and will consist of 11 stops in seven states. Those on the tour will be honoring people who are increasing access and opportunity for students, according to the U.S. Department of Education web site.

Eboni Zamani-Gallaher, a professor of educational policy, organization and leadership, said she plans to attend Duncan’s visit to campus. She said she believes members of the College of Education are excited and interested in what Duncan will share.

Zamani-Gallaher said she’s happy the University is one of the stops on Duncan’s tour and is curious to hear about the innovative ideas he has about student achievement.

Duncan was nominated to his position by President Barack Obama and approved by the U.S. Senate in January 2009. Before serving as secretary of education he was the chief executive officer of the Chicago Public Schools. During his time with CPS, Duncan focused on raising education standards and improving the quality of teachers in the public school system, according to the White House web site.

Kahn said she hopes Duncan discusses how teachers in Illinois can help students be more prepared for college. She is also interested in problems that arise from standardized testing in Illinois, specifically for students with disabilities. Kahn said she felt prepared for college after high school, but her experience student teaching made her feel that students from urban areas, similar to the Champaign-Urbana area, are more likely not to earn high school diplomas and experience violence in school.

She said she hopes to find out how to help more students in cities be successful and want to graduate from high school and eventually graduate from college as well.