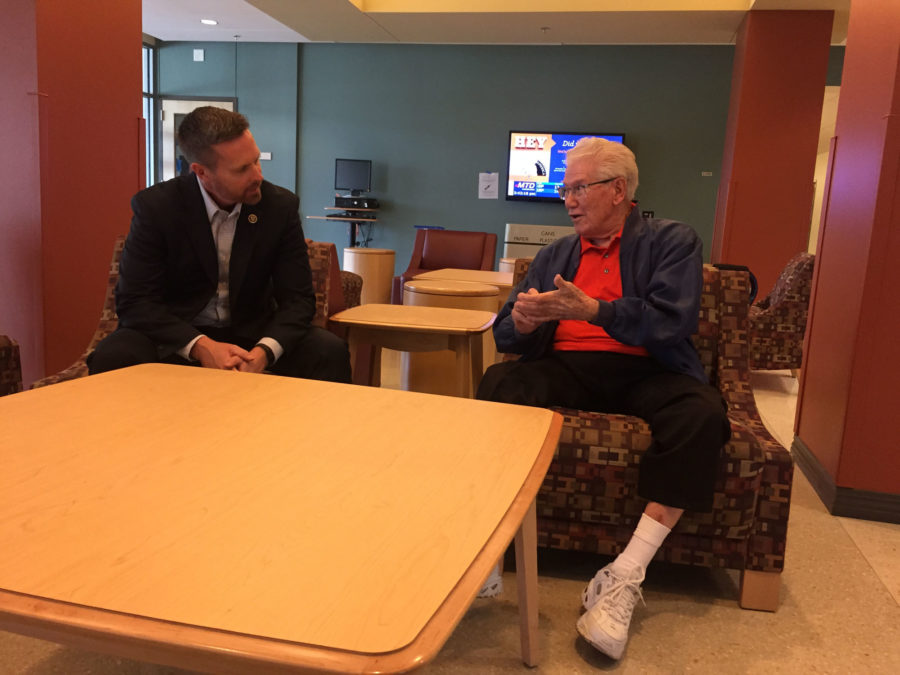 During a visit to Nugent Hall and the University‘s DRES facility, 1207 W. Oak St., Saturday Davis, announced he will propose a bill to nominate Nugent for the Congressional Gold Medal.

According to the Office of the Historian, Congress has awarded gold medals for national appreciation of various achievements since the American Revolution.

Mark Neuman, University alumnus and friend of Nugent, was the first to suggest awarding him the Congressional Gold Medal.

“I am a very proud alumnus,” Neuman said. “I felt like the world needs to know these programs started here. We invented them here.”

Although DRES was originally founded to help veterans, the mission now is to give all individuals with disabilities an opportunity to participate at the University.

Davis said the Congressional Gold Medal has never been awarded to someone who helped disabled veterans, so he is optimistic the bill will pass. The bill needs a two-thirds majority in the House or Senate to pass; Davis said he and Sen. Mark Kirk, R-10, will introduce the idea next week.

“You never know with Washington,” Davis said on how fast he believes the bill will progress. “Senator Kirk, however, is a great person to have on our team. He understands how important this use is, and he can talk about his own struggles.”

Kirk suffered a stroke in 2012 and has since suffered impaired use of his left side.

“When we drafted the ‘Dear Colleague’ letter to propose the idea, we usually try to keep it to a page or less,” said Frank Santana, legislative assistant to Davis. “But once we listed off all of Mr. Nugent’s accomplishments, we had taken up eight pages. They really speak for themselves.”

The ‘Dear Colleague’ letter is a standard letter sent to congressmen and their staffs to urge them to support various legislation.

“I was going to quit my sophomore year,” Nugent said. “But then my first veteran, Harold Sharper, died in my arms. He said, ‘Tim, don’t quit. These sons of bitches don’t know what they’re doing.’ So, I stayed.”

Nugent said he does not expect to win the medal but said he is still hopeful about the possibility.

“We take how far we’ve come on campus in not too many years,” Davis said. “A lot of that is due to Tim Nugent.”