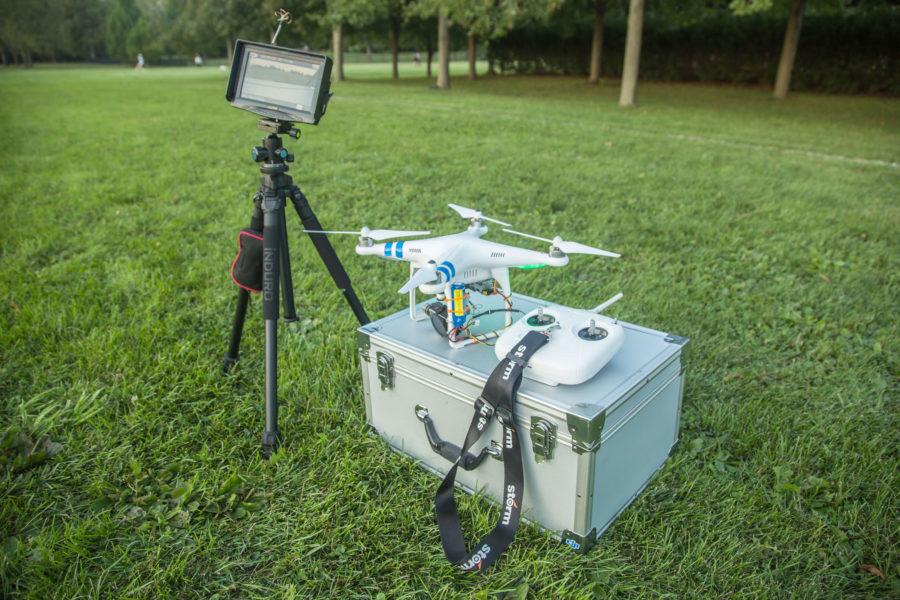 Nick Yi used to shoot photo and video from the ground, but one day, he wondered what campus would look like from above.

He attached his GoPro camera to a quadcopter and started flying and filming around campus. The result: A YouTube series titled “Fly High,” which he has released on his personal channel under Creative Commons. So far, he has released two videos; the most recent was published on Aug. 27.

Yi said he wanted to provide a view of campus unlike any other through his aerial. From above, the typical bustle of students going to and from class seems serene and peaceful. Campus landmarks such as the South Bell Tower and Foellinger Hall stand out when viewed from the sky.

Yi, a University alumnus who now works at University Public Affairs and co-owns the production company 50Diamonds, described the filming process as relatively straightforward. All it takes is a quadcopter, a type of drone similar to a small helicopter, plus a camera, remote, monitor, and good weather.

“Mostly it’s me walking around and trying to find a place that I think will look interesting,” he said.

Yi uses a Phantom 2, a midweight quadcopter made by DJI. With a GoPro camera attached, it can become a stable and simple filming platform.

To assist him in the filming process, Yi recruited his friend Conor Kennett. The two were roommates, and once Kennett became interested in Yi’s filming, he decided to help him out. Kennett acted as a spotter, letting Yi know if he got too close to buildings or trees.

Kennett was also involved in the eventual decision to release the videos under Creative Commons, meaning that the videos can be downloaded and shared commercially or for free, as long as Yi is credited.

“(Yi) explained how Creative Commons works, and from what I absorbed, it seems like a really interesting idea,” Kennett said. “I know when I was doing telecommunications in high school, I would’ve loved footage like this to use for music videos.”

Aerial footage in films can serve as an effective establishing shot. But Yi explained how these often take more time and money than a beginning photographer can afford.

“Frankly, the campus here is really nice-looking,” Yi said, which is part of the reason why he decided to make the videos accessible to the public.

Releasing content for free is something that Yi said benefits him as a freelance photographer.

“I do want to get my name out there,” he said. “It has helped with some marketing things … and then I just really enjoy doing it. It’s a blast to go out and fly. It’s fun to do.”

Music for the videos was another aspect of Yi’s desire to make it a “free project.” For his first two installments in the “Fly High” series, he has featured local music groups Boycut and Tara Terra.

At an open mic night at Joe’s Brewery, Yi approached Emily Otnes, singer/songwriter for both Boycut and Tara Terra and asked if he could use her music. She thought it sounded like a good idea.

“I try to help out any chance I can,” Otnes said. “Making anything available to students is important. We need to be able to see art displayed, so we can be inspired to do the same things.”

Using local musicians was Yi’s way of giving back to the Champaign-Urbana community.

From a larger perspective, Yi said Creative Commons is a part of something he believes in as a content creator.

“I think it’s important to push our abilities not necessarily for compensation,” he said. “Not everything needs to be run by clicks or how much money we get.”

Yi explained how for a long time, when people thought of Creative Commons, they typically thought of low-quality content.

“I think that the community at large, or at least here, is moving away from that,” he said. “It’s like, no, we actually believe in the projects that we’re working on, we believe we can offer something of value, without asking for something in return other than this is what we love doing. It’d be pretty cool if other people saw that.”

Yi has four more videos planned for “Fly High,” and plans to continue being a freelance photographer, shooting and taping wherever life takes him.

“I don’t really have a laid out, long-term plan,” he said. “It’s kind of wherever I’ll go, if I get a chance to take a road trip somewhere, I’ll take it with me, kind of thing.”