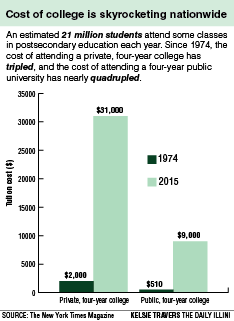 Although tuition rates are more expensive than in the past, some University professors still believe the choice to attend is worth it.

Undergraduate tuition, room and board at public institutions rose 39 percent between 2002 and 2012, according to the National Center for Education Statistics.

Walter McMahon, economics professor emeritus, was featured in a September New York Times article for his book “Higher Learning, Greater Good” in which he discusses the economics behind a postsecondary education.

According to McMahon, the major culprit of increasing college tuition is the government.

“The major reason that the cost of postsecondary education is so high is that state governments have been cutting back on their support for higher education, which has forced four-year institutions to increase their tuition to survive,” he said.

Despite the cost, there is still great benefit associated with attending college. Experts agree that obtaining a postsecondary degree is overwhelmingly worthwhile for an individual in the long-run, as long as it is from a reputable institution.

“Students with a college education save a larger percentage of their overall income,” McMahon said.

“There are a number of for-profit schools that have been taking advantage of students who don’t know better, and cases of those people who have basically been ripped off has been very well publicized,” she said. “It’s still overwhelmingly true that on average you’re better off with a college degree in the job market.”

Still, for students who are paying for the majority of their college education on their own, these numbers can be troubling.

Lauren Hicks, junior, said she took out federal student loans for the first time this year in an effort to take away some of the burden from her parents, who are paying for the majority of her college tuition at the University.

“I’m probably going to be paying off these loans for the rest of my life, and it’s troubling to hear that so many other students are in the same situation,” she said. “I totally get why some people don’t even bother going to college anymore, because everyone keeps saying it’ll be worth it in the long-run, but it’s hard to see that when you’re swamped with debt right now.”

Ty Zacker, senior in accounting, is paying about a quarter of his tuition on his own. He believes that the most troubling aspect of rising tuition costs is that students spend more time focusing on how they are going to pay for their classes than actually learning.

“I think everyone obviously wishes that college tuition was a lot cheaper,” Zacker said. “And working 20 to 25 hours a week to help pay for school usually means I’m really tired in class or it’s harder for me to focus on studying for exams when I’m stressed about paying bills.”

Income aside, there are those who believe there are many aspects of receiving a postsecondary education that will be beneficial for students.

“There are many more reasons to go to college than ‘I’m going to make X when I get out,’” Powers said. “Education is something you have your entire life.”