Policy language a hot topic for the Senate Executive Committee 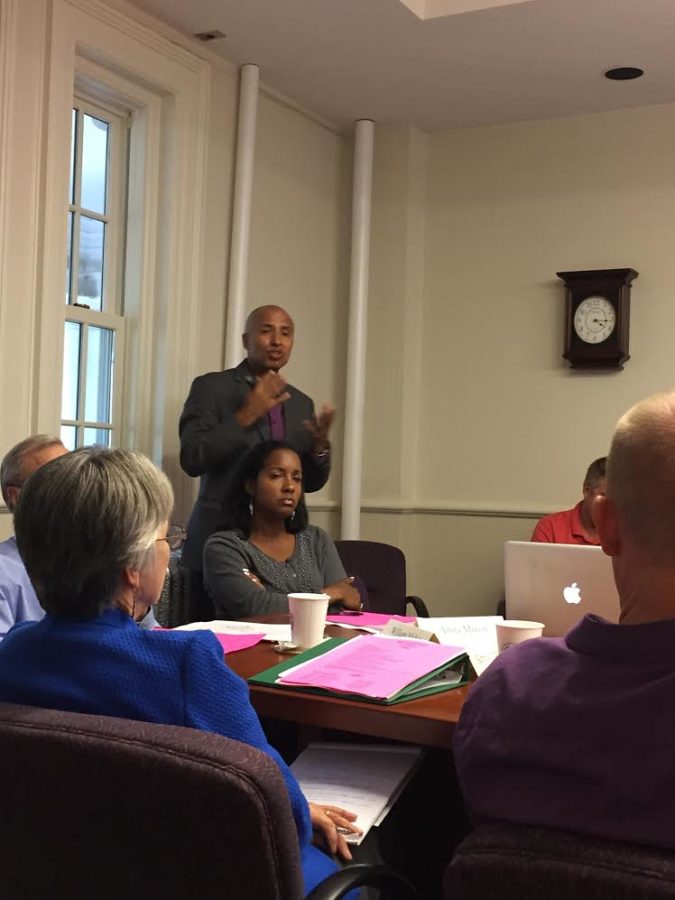 Concerns about policy language dominated the Senate Executive Meeting on Monday, where members discussed the background check approved by the Board of Trustees Thursday and the creation of the chancellor search committee.

The University will implement a new background check policy on Oct. 5. The policy has been in the works for two years, but now that it’s official, members of the Senate Executive Committee have some concerns.

“I wanted to express that we’ve been working very hard to try to balance liability issues an institution like ours faces against the need to maintain competitiveness and fairness in our search process,” said Interim Dean Edward Feser. “In our implementation of what the Board of Trustees mandated, we worked very hard to make sure we protect the search process as much as we can while still meeting the policy that has come down from the Board.”

“We are not doing anything different from what other institutions are doing,” said Abbas Benmamoun, vice provost for faculty affairs and academic policies.

Benmamoun said that General Information Services Incorporation, the company that currently handles the University’s background checks, will continue to complete background checks under the new policy. However, the check can’t be completed until the new hire gives GIS authorization.

“Nothing can continue in a hiring offer until a background check is completed,” said Deb Stone, University human resources representative.

Anita Mixon, communications graduate student and SEC representative, said one of her concerns is ensuring the language distinguishes the difference between declining a background check and failing it.

“I would hate for a person to feel they couldn’t take other opportunities from other universities if these universities were told the person failed a background check rather than they declined to take one,” she said.

Stone said the language would likely state the University withdrew the offer to the candidate. David O’Brien, SEC member and architecture professor, said he still had concerns about the language.

“I appreciate the effort, but I see it as very problematic that this won’t be an invasion of a person’s privacy,” he said.

Benmamoun again stressed that a conviction history would not be an automatic bar to employment.

“There are no automatic bars to employment,” he said. “It is an individualized assessment with a review committee that will meet as needed.”

It would address any hits that come up in a candidate’s background check, and make a recommendation to the provost’s office on whether the hiring should proceed.

“I’m concerned about only two faculty members,” said Abbas Aminmansour, SEC member. “I don’t think we can get it perfectly, but more faculty can offer more input in addressing the suitability of the candidate to teach in whatever field.”

Bill Maher, SEC member, suggested a pool of six to eight faculty members who could be called to serve at any given time. Under Maher’s suggestion, no faculty hiring case could be decided on unless both members were present.

“I can’t imagine a case where I would be satisfied with the recommendation of a faculty member with no faculty members present,” Feser said.

While Benmamoun said he appreciated the questions and concerns of the SEC members, he believes the policy will be implemented as fairly as possible.

“I need you to understand the Board required background checks, and we were able to make sure we have discretion on how they were implemented as fairly as we can,” he said. “We want to make sure we balance risk while serving our core educational and mission values.”

The policy will be recommended for a vote at the Academic Senate meeting Sept. 21.

On Aug. 31, the SEC held an emergency meeting in which it revised the chancellor search committee document. Kim Graber, SEC vice chair, was not present when the document was revised and voiced concerns at the Monday meeting.

“When I got the minutes from last meeting I was a little upset about the change of the SEC no longer appointing the last two faculty members to the committee,” Graber said. “I cannot emphasize how important that is.”

Before the revisions, the chancellor search document advocated for a committee chaired by a faculty member and comprised of seven additional faculty members, three students — at least one undergraduate and at least one graduate student — one dean, one academic professional and one staff member.

Graber said she was a member of a search committee in 2005 and that if the SEC had not selected the remaining two faculty, the committee would have consisted of all white members.

“This would be a bad reflection on our University and what we stand for,” she said. “This really, really concerns me and I hope that you would reconsider.”

“I have also heard very, very negative feedback on this decision,” Burbules said.

Some SEC members felt the committee should not retain the power to select two faculty members for the committee due to recent controversies in the administration.

“The fundamental issue hasn’t changed here,” said Calvin Lear, SEC member. “The senate is going to look at this and say the SEC is attempting to pad the committee with their own chosen supporters; saying we’re only going to do it to ensure balance and diversity doesn’t make us seem any less nefarious.”

However, Anita Mixon, communications graduate student and SEC representative, mentioned an Illinois law that requires a chancellor search committee to represent minorities, including women. In order to comply with the law, the SEC needed to add a provision for minority representation in the document.

John Hart, SEC member, suggested a policy allowing the academic senate to vote for committee members first. If the senate did not produce a law-abiding committee, the first two highest votes garnering minority individuals would be added to the committee.

“This meets the law, and it requires the least intervention from the SEC,” Lear said. “It’s just a selection of people based on votes.”