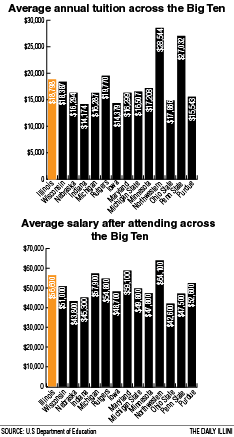 Alumni, students and parents who scoffed at Princeton Review’s decision to list the University as the number one party school for 2015 aren’t alone. Recently, President Barack Obama stated prospective college students don’t need to know who drinks the most beer but rather “need clear, reliable, open data on college affordability and value.”

Thus, the White House launched the College Scorecard, a project Obama has mentioned sporadically since 2013. Obama said the new system should include information on whether students are likely to graduate, find good jobs and repay loans.

Charles Tucker, vice provost for undergraduate education and innovation, said he thinks the ranking system provides “very useful information” that will be most helpful to prospective students and their parents.

The Urbana campus was included on the scorecard’s list of top 15, four-year public institutions with high graduation rates that lead to high incomes.

“Students and families don’t always understand the actual amount you pay to go to college is not always the sticker price,” Tucker said. “Sometimes it’s not even close to the sticker price.”

For example, he said, the yearly cost of tuition and other fees at the University is listed at about $30,000 but the average cost of attendance is $18,798 after financial aid. He said this shows how much of the University’s resources go toward financial aid.

“We really put an effort toward getting a broad range of students to attend the University,” Tucker said.

The site allows students to filter out schools based on programs and degrees, location and size. Students can also search specific schools by name to view more information on the costs, financial aid and debt, retention, earnings following graduation, programs, the student body and average SAT and ACT scores.

The system goes into detail about demographics at the University too. For example, it states 20 percent of students have a family income of less than $40,000 per year.

As for other rankings, such as the Princeton Review or U.S. News & World Report, Tucker said he thinks they are useful but it is important to remember that some are more data based and others are more reputation based.

Emylee Zdarsky, freshman in LAS, said she looked at various rankings when she applied to college but didn’t put much stake in them.

“I probably would have used it to research schools,” Zdarsky said. “It would have given me a better understanding of what the rankings actually mean and make the process much simpler.”