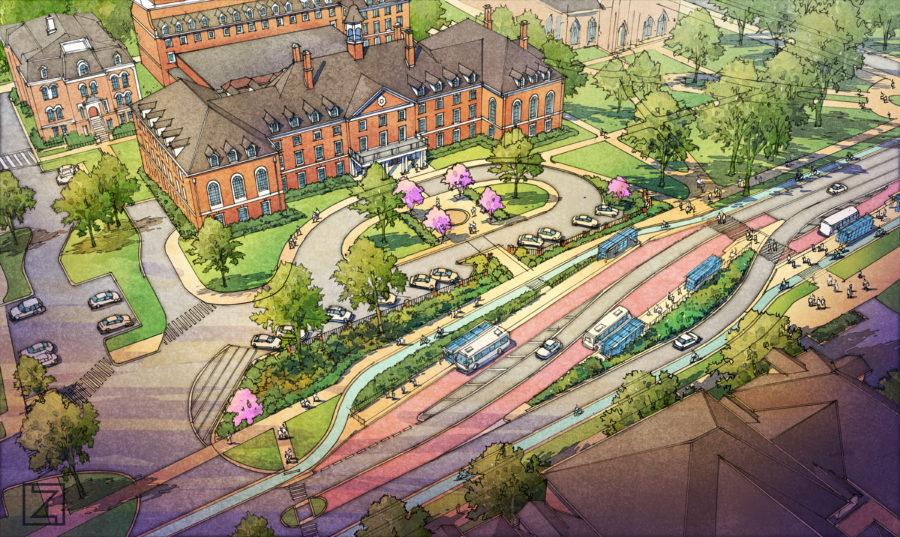 An MCORE open house revealed plans for construction on the University’s campus. This is a photo illustration of how Green Street will be designed after construction is finished.

Major construction is scheduled to begin on campus next fall, as Green Street will see the addition of a protected bike lane, a new entrance to the Illini Union and a transit boarding island.

The cities of Champaign and Urbana, the Champaign-Urbana Mass Transit District and the University unveiled the selected designs for their Multimodal Corridor Enhancement (MCORE) Project on Thursday at an open house at the Alice Campbell Alumni Center.

According to the website, MCORE, which is split into five projects, is set to cost $35 million and is partially funded by a $15.7 million Transportation Investment Generating Economic Recovery (TIGER) grant the CUMTD received from the U.S. Department of Transportation last year.

Project one, scheduled to be completed in 2017, is slated to update Green Street from Wright Street to Busey Avenue. According to the MCORE web site, the plans for this section of Green Street were designed with a focus on streamlining pedestrian movement between the main campus and the engineering campus,

In addition to the new Illini Union entrance and parking lot, all-way pedestrian crosswalks are featured in the plans. Bicycle lanes will also be updated with a 1.5 inch concrete band separating the main road from bicyclists.

The final project to begin construction next fall, project three, will renovate White Street from Second Street to Wright Street and along Wright Street from White Street to Springfield Avenue. According to the MCORE web site, this section hosts six MTD bus routes which stop at 11 MTD bus stops which averaged 4,683 boardings and alightings each weekday during the fall 2014 semester.

As with project one, this project is aimed at improving the flow of transportation.

Projects four and five are set to begin construction in 2018, after the completion of the first three projects. Project four will renovate Armory Avenue and Wright Street along the western length of the Main Quad, and project five will renovate Green Street from Busey Avenue to Race Street.