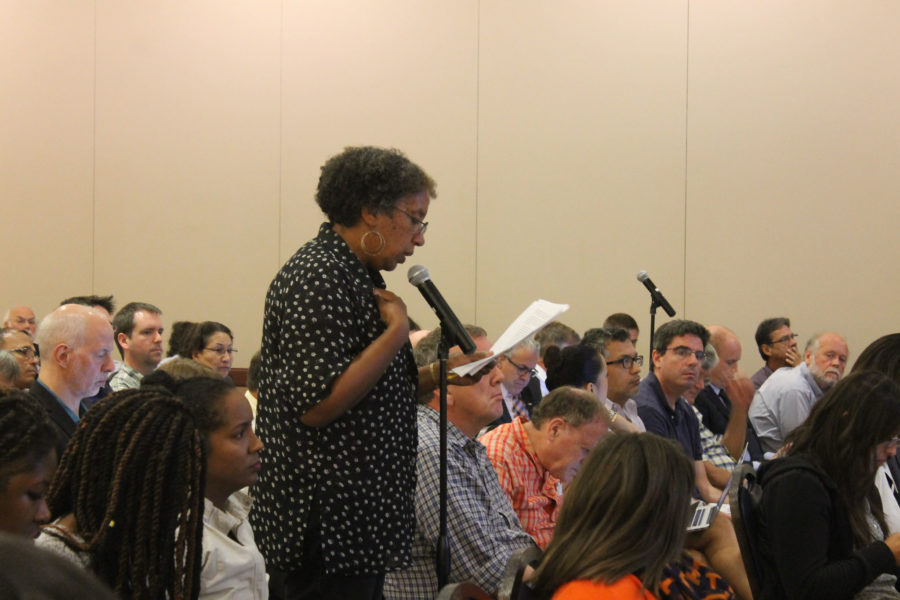 Teresa Barnes, History professor, proposes a resolution to urge the Board of Trustees to postpone the implementation of a new background check policy.

The newly approved background check policy is expected to be implemented in less than two weeks, but the Academic Senate might put it on hold.

Teresa Barnes, professor of history, presented a resolution at the Academic Senate meeting Monday asking the senate to urge the Board to postpone the implementation of the new background check policy. Following Barnes’ presentation and discussion, the senate voted in support of the resolution and will ask the Board to postpone implementing the policy.

Barnes argued there is no appeal process in the implementation of the policy, but Abbas Benmamoun, vice provost for faculty affairs and academic policies, said hires whose background checks return a “hit” have the opportunity to submit reference letters and other explanations from family, friends, ministers, probation officers and others.

“(The letters) are from people who know you and can vouch for you,” he said.

He added the policy was created to best balance safety for the campus community and fairness to new employees.

Barnes said the background check policy should be postponed for a variety of reasons. The policy is unfair because it is completely subjective, she said. She added the process becomes much more difficult after a person is found to be a felon. However, Barnes said a person convicted of a felony who has completed their prison sentence has been “by definition” judged by the U.S. Judicial system as fully rehabilitated and ready to rejoin society.

The University chose to retain the company who previously conducted background checks, General Information Service, or GIS. According to Barnes, however, in 2014, the company settled a multi-million class-action lawsuit with 53,000 people for 3.2 million dollars on allegations that it misrepresented information and violated the Fair Credit Act.

“UIUC cannot have any certainty that GIS and other companies will not make the same mistakes,” she said.

Harry Hilton, professor emeritus in aerospace engineering, said the policy itself is not what’s most “disturbing,” but rather the fact that there was no faculty or campus consultation on behalf of the Board of Trustees before the policy was approved.

“This is no way to behave.”